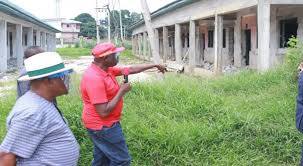 Governor Nyesom Ezenwo Wike of Rivers state has said he will upgrade facilities in schools that have contributed in moulding prominent personalities and made the state famous, educationally.
Wike gave the assurance after inspecting the rehabilitation of Government Comprehensive Secondary School and the Enitonia High School in Borikiri Town in Port Harcourt .
He expressed sadness over what he called wastage of funds by the previous administration for building new schools far away from where large number of people reside and abandoning structures of the old school.
The Governor asserted that if proper attention had been given to schools, which are located within densely populate areas, they would have impacted more positively on products of the state.
“I feel so sad that these schools are in such bad state. They are schools that have made the state pride. I don’t know why government will believe and continue to build new schools instead of putting the old schools in a position where they can be very conducive for students.
“You know those who have made names in the Port Harcourt; some of them attended these old schools. I have promised that we will do all we can to bring back the schools to what they used to be.
“I’ve rescheduled another meeting with the old students of the Government Comprehensive Secondary School, led by their chairman, Noble Abbey, to see what other things we will add to the ongoing rehabilitation but the landscaping is a top priority to us, “he said.
“I won’t allow the schools to die. We must continue to retain the name. We will also look at the schools that missionaries have taken over like the Okrika Grammar Schools. We will invite the missionaries to discuss the modalities,” he added.
The governor also inspected extent of work done at the Real Madrid Football Academy located at Elekahia Town and said no excuse will be accepted from the contractor from handing over the project in August.
He said the academy must commence formal training in sports and academic activities in September when the new academic session begins.