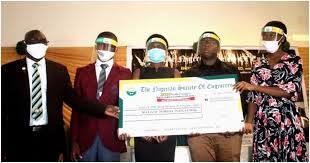 The Nigerian Society of Engineers, has granted a N16m scholarship to 16 candidates who had the highest scores in the last Unified Tertiary Matriculation Examination.
The NSE Chairman, Babagana Mohammed, stated this at a scheduled meeting of the NSE on Tuesday.
The meeting was held in honour of the top UTME candidates in the country who incidentally all seek to study engineering.
About 13 students scored above 350 with Miss Maduafokwa Egoagwuagwu from Anambra State getting the highest with a score of 365.
Mohammed said, “The registrar of JAMB sent me a message that one of his directors is going to join me on this line; Lawal Yusuf and what he advised me to say is that anyone of them that gets admission and is matriculated will enjoy the scholarship.
“He said not all who got good results would get into school and I asked why. He said some are below age and some schools have a standard and if you don’t meet up with that age, you cannot get admission. That is what the registrar of JAMB sent just now.”
“But for the records, we are going to give a scholarship of five years to each candidate that gains admission. If you gain admission next year, you are still entitled. That is the advice I got from JAMB.”
Mohammed said the scholarship would be extended to 16 candidates from 13 and subsequently presented a cheque to each candidate.
He promised that the NSE would henceforth grant scholarships to the best UTME applicants.
The NSE chairman also handed out laptops to all the candidates.
The candidate, who scored the highest, said she was able to do so through the help of God and extensive studying.
Egoagwuagwu, who seeks to study Industrial Production Engineering at the University of Ibadan, thanked the society of engineers for the kind gesture and promised not to sit on her laurels.
She called on her colleagues to continue to believe in themselves and trust God to do the rest.
Egoagwuagwu said, “I feel very happy representing my state, Anambra, my school and my family. I chose engineering because this country and the world at large needs many brains with the ideas that can help us develop and move forward and what better course than engineering