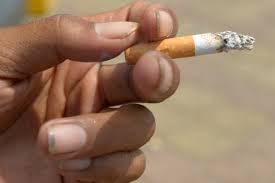 The Federal Competition and Consumer Protection Commission, FCCPC said family members and people around cigarette smokers stand higher risks of lung diseases than the smokers themselves.
The FCCPC Director-General, Mr Babatunde Irukera, who spoke at the News Agency of Nigeria (NAN) Forum in Abuja on Sunday, said science has confirmed that secondary smokers stand higher risks.
He said his commission would protect the interests of such people, especially minors, in its enforcement of the National Tobacco Control Act.
The FCCPC DG said the commission was sensitive to the plight of minors whose family members were involved in the habit of smoking.
“I firmly believe that I have a responsibility to protect the choices people make. And so, even smokers are consumers who warrant some level of protection. However, I think the science is very clear”, he said.
According to him, smokers must make sure that they are engaging in the habit based on an informed decision.
He said a smoker’s liberty, prerogative or discretion ends where it potentially infringes the rights of others, adding that science was clear that second hand tobacco smoke is harmful.
“We will make sure that they engage in the habit in a manner that does not endanger others in the society including members of their families because minors are involved.
“We owe more sensitive responsibility to make sure that even children of smokers are protected from the potential harm associated with their parents’ choices,’’ he said.
Irukera noted that the commission would soon commence its enforcement on the sale of sticks of cigarette which was one of the key access control measures.
He said that the delay on the enforcement was to ensure that producers, importers and distributors of the cigarettes, distributed their products in a way that was not in violation of the law.
The director-general, who disclosed that the commission had improved its enforcement drive, called on citizens to demand and insist on their rights and involve the regulator in the event of abuse.
According to him, “the most important thing I think people need to know is that the services you pay for or the things you pay for are not a favour.
“Service providers and those who sell things to you owe you an obligation,’’ he said.