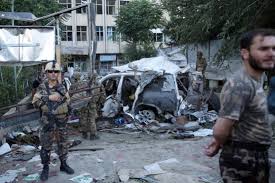 Ten militants were killed on Sunday after warplanes struck a Taliban gathering in Ghazni province, eastern Afghanistan.
The provincial government spokesman, Wahidullah Jumazada, said that security forces acted on a tip-off and killed ten.
He said; ”the aircraft struck a gathering of Taliban insurgents in Tawsang village of Dehyak district at 2.30 p.m. local time on Sunday, killing 10 militants on the spot and wounding three others.
A car and four motorbikes of the insurgents were also destroyed during the air raids, he added.
According to reports, six more militants from Ghazni city were captured in the provincial capital and its surrounding areas over the past couple of days.
However, Taliban group are yet to comment on the airstrikes.