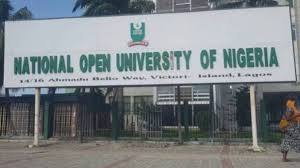 National Open University of Nigeria, NOUN, has notified the public against a report by an “obscure website” claiming that the institution was recruiting.
A statement issued in Abuja on Friday by NOUN Director of Media and Publicity, Malam Ibrahim Sheme, described the story published on June 20 as fake news.
He noted that the fake news was published by a website jobcenternigeria.com with a phone number of 0805 860 6531.
“The website’s false alarm, published on June 20, 2020, was mischievously headlined as Massive Recruitment at NOUN.
“NOUN has no recruitment drive for either teaching or non-teaching staff or junior staff, and is not recruiting any staff in any category.
“It is obvious that jobcentrenigeria.com was designed to be scamming millions of Nigerians into believing there are vacancies in respected institutions such as NOUN.
“Perhaps, its promoters were recruited by elements within and or outside NOUN to create a Denial of Service (DOS) application attack on the university in the public domain, giving the impression of a secretive recruitment drive.
“For the record, NOUN does not employ any staff without following the necessary steps for recruitment of any staff in a federal organisation,” Sheme said.
He also said that the university, after following due processes, had stopped all recruitment since joining the government’s new salary platform, the Integrated Payroll and Personnel Information System (IPPIS) in October 2019.
Sheme also noted that NOUN no longer operates a “School” system since 2016 when it started using the “Faculty” system for its academic units.
According to him, “the university joined the IPPS system as ordered by the Office of the Accountant-General of the Federation, and with that, has closed all recruitment of all categories of staff indefinitely.