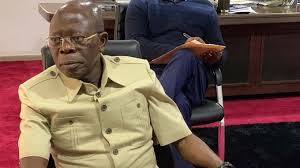 …court to decide the legality of the meeting

Despite calls by President Muhammadu Buhari to members of the Ruling All Progressive Congress, APC to withdraw all pending litigation in court, indications emerged yesterday that some sacked members of the National working Committee, NWC, loyal to Adams Oshiomhole may be heading to court to challenge the President action, who also doubles as the leader of the party.
The President had on Thursday dissolved the Oshiomhole Led National Working Committee of the party over the leadership crisis rocking the party.
A highly placed legal luminary in the All Progressive Congress, APC National secretariat who pleaded anonymity yesterday, told Nigerian pilot weekend that they are battle ready to resume legal battle over the decision that was taken by President Muhammadu Buhari.
He said that they will be meeting at the weekend alongside some funding father’s of the party, all the affected NWC members to take a final decision on the matter.
He further added that all the affected National working committee members of the party are working as a team to see how they will seek legal redress before a Federal High court sitting in both Abuja and Lagos.
18 members of the All Progressives Congress National Working Committee loyal to the party’s sacked National Chairman, Adams Oshiomhole, had on Thursday, insisted that the APC National Executive Committee meeting attended by the President Muhammadu Buhari was illegal.
The NWC members, who said this in a statement signed by the acting National Chairman, Hillard Eta, and the acting National Secretary, Waziri Bulama, stated that they were consulting their lawyers and other stakeholders on the dissolution of the NWC and other decisions taken at the NEC meeting on Thursday.
They insisted that the NEC meeting was illegally convened by the suspended Deputy National Secretary of the party, Victor Giadom.
A few hours after the NWC was dissolved at the instance of Buhari, the 18 members dared the President and others at the NEC meeting by issuing a statement where they referred to themselves as officials of the party.
Before the end of the virtual NEC meeting which began at noon on Thursday at State House, Abuja, Buhari’s social media aide, Bashir Ahmad, in his Twitter handle, said the dissolution of the NWC was based on the recommendation of the President.
He wrote, “Following the recommendation of President Muhammadu Buhari, the National Working Committee of the All Progressives Congress has been dissolved. Details to come”
At the end of the meeting, the Chairman of the Progressives Governors’ Forum, Atiku Bagudu, in an interview with State House correspondents, confirmed that the NWC had been dissolved.
He was joined by other state governors elected on the platform of the party, when he disclosed this to journalists.
He also disclosed that the party had set up a national caretaker committee headed by the Yobe State Governor, Mai Mala Buni.
Other members of the caretaker committee are the Osun State Governor, Isiaka Oyetola, representing the South-West; a former Senate President Ken Nnamani, (South-East), Stella Okorete (women representative), Niger State Governor, Sani Bello (North-Central); Dr James Lalu (the physically challenged), Senator Abubakar Yusuf (Senatè), Akinyemi Olaide (House of Representative), David Leon (South-South), Abba Ari (North-West), Prof Tahir Mamman (North-East) Ismail Ahmed (Youth) and Senator Akpan Udoedehe (Secretary) respectively.