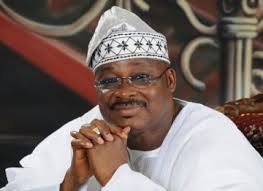 Former Oyo state Governor, Abiola Ajimobi has passed on at the age of 70.
The two-term governor and former senator died today, succumbing to COVID-19 and underlying symptoms.
He has been in hospital at First Cardiology Consultants Hospital in Ikoyi, for close to three weeks.
He was comatose and hooked on the ventilator, with hopes that he would come to.
Last week, the news of his death went viral, but it was debunked by his family members.
His death today coincided with the resolution of the leadership crisis in his party by the National Executive Committee meeting of the party.
President Buhari chaired the virtual meeting in Abuja today.
Ajimobi became a deputy chairman of the APC in March.
He was expected to steer the party after the suspension of Adams Oshiomhole as chairman, but he was incapacitated by illness that led to his death.
Thus, the role had to be performed by Hilliard Etta, vice chairman South South.
Today, the NEC of his party swept all members of the National Working Committee away.
Governor Mai Bala Buni of Yobe, a former secretary of the party was appointed as caretaker chairman, with Sen. Akpan Udoedehe as secretary.
Isiaka Abiola Ajimobi was born on 16 December, 1949.
He was formerly the Managing Director/Chief Executive Officer of the National Oil and Chemical Marketing Company a subsidiary of Shell Petroleum, Nigeria.
After early education in Nigeria, he went to the United States for further studies.
He studied Business Administration and Finance at the State University of New York, in Buffalo, New York.
He graduated with a Bachelor of Science degree.
He later went to Chicago for an MBA. He studied at Governors State University, University Park, Illinois.
He entered politics in 2003, contesting for a senate seat on the platform of the Alliance for Democracy. He won the election.
He was elected twice as governor of Oyo state, in 2011 and 2015.
He is survived by his wife, Florence, who he married in 1980, children and grandchildren.