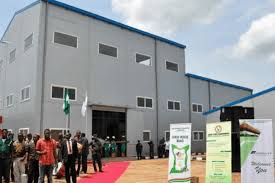 Lagos State Government has assured residents that the multi-billion naira 32 metric ton per hour rice mill at Imota area of the state would be delivered on or before the end of the year 2020.

The state Commissioner for Agriculture, Gbolahan Lawal, who disclosed this at a press briefing to commemorate the one year anniversary of the state government, explained that the rice mills had attained 80 percent completion level.

Recall that the Rice Mill was 35 percent when the administration came in May last year.

Lawal said, the mill when operational would ensure a steady supply of freshly processed rice of about 2.4 million bags of 50 kilogramme per annum to residents in addition to over 250,000 jobs that would be created in both the upstream and downstream sectors of the rice value chain.

He noted that effective efforts had been put into backward integration along the rice value chain to ensure adequate supply of paddy to the mill for smooth operation.

The Commissioner asserted that the backward integration includes the identification of farmers’ groups in conjunction with other states to cultivate the required amount of paddy and the provision of inputs such as seeds, fertilizers and irrigation facilities, where applicable, to the farmers.

His words: “This mill has attained 80 percent completion level compared to the 35 percent completion level it was in May 2019. When operational, the mill will ensure a steady supply of freshly-processed rice of about 2.4 million bags of 50kilogramme per annum to residents in addition to over 250,000 jobs that would be created in both the upstream and downstream sectors of the rice value chain.

“To meet the paddy requirement of the mill, we have undertaken a backward integration in form of collaboration with other states like south-western states, Kwara, Sokoto, Benue, Borno and Kebbi.

“This will be done leveraging on the anchor-borrower scheme of the Central Bank with the rice mill as the off taker of the products.”

Lawal further explained that the Agricultural Youth Empowerment Scheme (Agric- YES) has been revamped within the last one year in such way that a total of 15,000 women and youths would be trained and empowered in various agricultural value chains, especially poultry, aquaculture, rice, piggery and vegetable production by the year 2023.