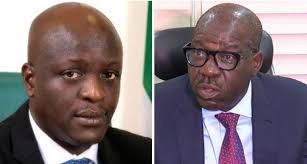 Hon. Omoregie Ogbeide-Ihama, one of Edo PDP governorship aspirant, has withdrawn his case in Port Harcourt against Governor Godwin Obaseki.

This followed an out-of-court settlement through which Justice Emmanuel Obile, of the Federal High Court stepped down the case.

Ogbeide-Ihama, had sued the National chairman of PDP, Prince Uche Secondus, Emmanuel Ogidi and seven others, including Obaseki.

He sought a court declaration restraining them from allowing Obaseki, who was not screened within the time stipulated in the timetable to contest the PDP’s primary.

Omoregie’s Counsel, Fredinard Orgbe before the hearing of the case requested that the court should stand it down.

This was to enable parties reach terms of settlement.

The lawyers to all the defendants also agreed with the request.