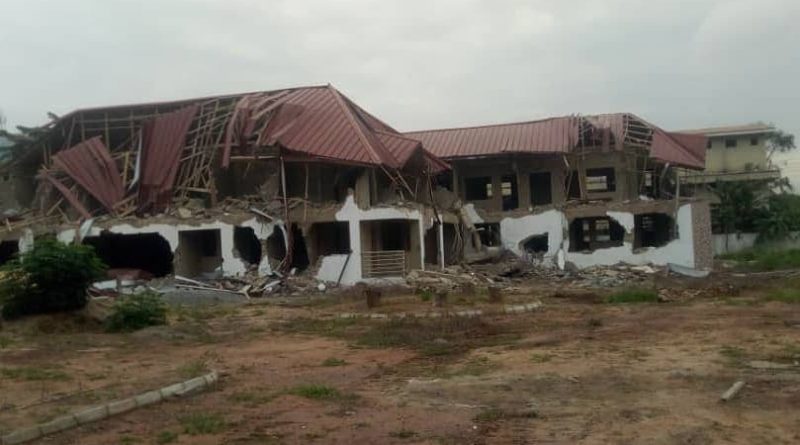 A top official of the Nigerians in Diaspora Organisation, NIDO, Ghana chapter has revealed that the Charge d’Affairs in the Nigerian High Commission in Accra, would have been bulldozed with the property destroyed.
The Vice-President of NIDO-Ghana, Mr Kingsley Attoe, told NAN, that the woman had run to the site on learning that a bulldozer was attacking the buildings.
“Our Charge D’ Affairs was asked to leave or be bulldozed. She had to leave the place after calling the police headquarters, which is just a few meters away.”, Attoe said.
He said no arrest had so far been made on the attack.
“The attack occurred at 10 p.m. on June 19, and the Ministry of Foreign Affairs has issued statement to condemn that act.
“There was no record of injury and the security operatives have been harassed over the incident.
“The information we have is that the High Commission was not informed, the guy who is said to be a businessman claims he owns the land title in 2019.
“We are petitioning the Foreign Affairs Committee, the Presidency in Nigeria, National Assembly and other relevant authorities in Nigeria, we need to act fast.”
Attoe described Ghana as a sister nation, which most Nigerians loved and are proud of, noting that some Nigerians do businesses there peacefully with great Ghanaians
He also noted that no High Commissioner had been appointed from Nigeria to Ghana, but that NIDO and other Nigerian associations had gone out to sort out the issue on ground.
He said although there was no proof the action was backed by Ghana government, Nigerian government should show displeasure over such action,
In its reaction, the Ghanaian Ministry of Foreign Affairs and Regional Integration in a statement said regretted the action by the unidentified businessman.
It said unidentified individuals breached the premises of the High Commission and demolished the property under construction at about 10.30 p.m.
“The Ministry views with concern this development which is a breach of the Vienna Convention on Diplomatic Relations (VCDR, 1961).
“Investigations are ongoing to unravel the facts of the matter and bring the perpetrators to book.
“Meanwhile Ghanaian government has beefed-up security at the said facility and the situation is under control” he said.