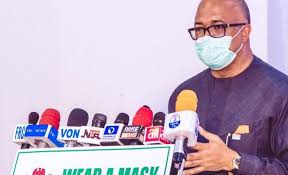 Three Nigerian ministers, Osagie Ehanire, Lai Mohammed and Chris Ngige have lambasted resident doctors for a “needless and insensitive” strike, saying issues raised by their association had received attention.
Mohammed, the Information minister, Ngige Labour Minister and health minister, Ehanire lashed the doctors at a media briefing on Sunday in Abuja.
The rebuke came hours after the National Association of Resident Doctors,NARD called off the almost two-week strike by its members.
Mohammed noted that the strike which began on June 12 was uncalled for, considering that government had responded to their needs and requests.
“It is pertinent to say that the issues raised by the association while issuing its ultimatum on June 1, have received or are receiving full attention,” he said
Specifically, the minister said that Personal Protective Equipment, PPE have been supplied to all States and Federal Tertiary Hospitals and funds for the same were being provided in the revised 2020 budget.
He said the implementation of the Residency Training programme was backed by the National Assembly, which provided ₦4 billion in the revised 2020 budget.
“We have paid N9 billion as premium for Group Life Insurance to all our health workers and over N4.6 billion as Special Hazard Allowance to health workers as already acknowledged in at least 35 hospitals.
“In summary, a total of 55,031 health workers have been paid comprising of 23 COVID-19 designated Hospitals and Medical Centres and 8 non-COVID-19 designated centres amounting to over N7.9 billion,” he said
He added that other matters relating to non-payment of arrears dating back as 2014 or salaries owed by State Governments, were either in court, or beyond the power of the Federal Ministry of Health to resolve.
On addressing the COVID-19 pandemic, the minister said apart from the provision of PPEs and other equipment, the federal government expanded testing laboratories from two to 38.
He said government has trained over 13,000 health workers on Infection, Prevention and Control, IPC as well as developed policy and protocols for testing returning Nigerians.
Mohammed said government has evolved policies and protocols for integration of primary healthcare into national response and increased isolation centre bed space from 3,000 to more than 5,000 nationwide.
The minister expressed concerns that the doctors still opted for the strike ins pite of addressing all issues raised and negotiations facilitated by the National Assembly.
“We must express the government’s consternation that resident doctors will choose a time like this, when we are battling a pandemic, to embark on a strike.
“This negates what obtains in other parts of the world, where health workers are rallying around their governments to tackle the COVID-19 pandemic.
“Nigeria must be among, if not the only nation, where doctors – who are classified as essential workers – have opted for a strike during a national health emergency,” he said
Mohammed noted that, though many options were opened to the federal government in tackling the strike, yet it chose negotiation over confrontation.
On his part, Ngige said it was a dire time for any sector, particularly the heath sector to embark on strike.
He re-echoed that all issues raised by the Doctors had been met by the Government and they should have trust in the Federal Ministry of Health.
The minister disclosed that the leadership of NARD contacted him by midnight and hinted on the suspension of the strike.
Ehanire also lashed the doctors.
He said it was not time for acrimony as all hands must be on deck for the country to defeat the COVID-19 pandemic and salvage the health sector