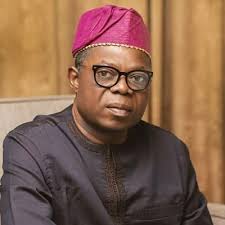 Immediate past deputy clerk to the national assembly, Chief Olayide Owolabi Adelami, has declared that he decided to join the governorship race in Ondo State because he is on a rescue mission to liberate his people from the manacles of poverty, deprivation and politics of exclusion that has kept them in perpetual doldrums despite the enormous resources the State is endowed with.
Adelami stated this at the National Secretariat of the All Progressives Congress, APC, when he was been presented with nomination and expression of interest forms purchased on his behalf by his supporters under the auspices of Ondo State Rescue group.
The experienced accountant and business administrator with 35 years of meritorious public service and outstanding record of accomplishments at the national assembly and other federal government parastatals said if given the mandate to lead the State as the Executive governor, he would make people oriented programs the priority of his administration.
“Local government autonomy will be my first priority as governor. I will grant financial autonomy to the local government because being the government at the grassroots, I believe if they are given the freedom to utilize the fund voted to them for the people, it will go a long way in ameliorating the suffering of the people at the grassroots,” Adelami said.
Speaking on behalf of Ondo State Rescue group, Mr Olawale Ogedengbe who presented the forms on behalf of the group to the governorship aspirant, said the group which comprises of students and youths from all across the State decided to contribute their little earnings together and obtain nomination form for Adelami because they believed in his credibility and capability to lead the State to the next level.
Also speaking, Mr Adekola Ajibola, a representative of the vulnerable and physically challenged group in the State testified to the antecedents of the governorship aspirant on how he has been transforming the lives of the university level to realize their dreams.
According to Mrs Abdullahi Mariam, a representative physically challenged, particularly, those with talents whom he identified, mentored and nurtured up to the of the widows and orphans in the State, Adelami has, through his family foundation, Elizabeth Foundation, which he founded with his wife, affected the lives of widows and orphaned children by feeding, clothing and paying their children’s school fees and medical bills.
Adelami is one of more than ten aspirants who have indicated interest to contest the APC primary election slated for July 20, 2020 to determine the party’s flagbearer for the October 10 governorship election in Ondo State.