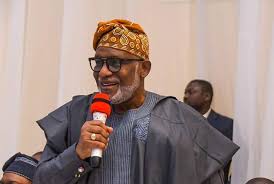 Members of Ondo State Professionals Forum, Abuja, OSPFA, led by its Chairman, Arc. Tunde Imolehin met with Gov. Arakurin Oluwarotimi Akeredolu, SAN and convassed for continuity, consolidation, sustainability and professional integrity in governance.
The purpose of the visit was to further familiarize and intimate the governor with some of the activities of the group and to also rally support for his re-election bid.
The meeting which had in attendance, the Chairman, Arc. Tunde Imolehin, Secretary, Mr. Dele Fulani, Mr. Lekan Olotu and other members of the Forum was largely successful and monumental.
Speaking on behalf of the group, Forum Chairman, Arc. Tunde Imolehin , stressed that the Forum was established to promote the pristine ideals of professionalism in all strata of the society particularly governance which the governor stands for as a thoroughbred professional and a former President of the Nigerian Bar Association (NBA) with a distinguished record of service.
He said the group was impressed with the catalogue of unprecedented achievements recorded by the governor in the area of infrastructural development within just three years in office.
Imolehin pointed out in particular, the construction of the road leading to his town, Ipele, for which the people of the community have suffered for so many years.
He praised the governor for taking up the gauntlet and defying all odds posed by the dwindling global economic fortune to put smiles on the faces of the people in the state.
The chairman said the group was ready to roll up its sleeve and go into the field as well as nooks and crannies of the State to campaign for the Governor to secure a second term in office.
Also speaking, the Forum Secretary, Mr. Dele Fulani eulogised the governor for taking the bold step he took in achieving the giant strides he has recorded so far.
Fulani specifically thanked the governor for leveling and reconstructing the popular Oke Alabojuto hill which has been a major cause of fatal accident leading to the loss of innocent lives of the people of the area for so many years.
In his response, Governor Rotimi Akeredolu thanked the group for its support and solidarity towards realizing the goal of his re-election come October 10, 2020.
The Governor recalled the unflinching support he has been receiving from the chairman of the Forum, Arc. Tunde Imolehin, which dated back to 2012 and his consistent contributions to the party.
While answering questionsfrom Nigerian Pilot Newspaper, the governor promised to work with the group, and also used the medium to reel out some of his numerous projects to be executed in his second term, top of which included; the signature project of Port Ondo which has the potential of stimulating industrial revolution in the state and generating thousands of employment opportunities for the youths.