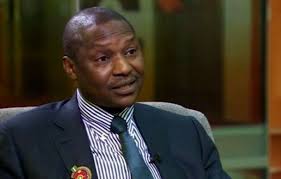 Minister of Justice, Abubakar Malami, has recommended the acting Chairman of the Economic and Financial Crimes Commission, EFCC, Ibrahim Magu to Buhari for sack.
Malami, in a memorandum to the president, anchored his recommendation on several grounds “ranging from diversion of recovered loot to insubordination and misconduct” by Magu.
ThisDay reports that Malami included in the memo, a short list of three candidates for consideration to replace Magu. The report also claimed that Malami made 22 weighty allegations against Magu.
Malami alleged accounting gaps or discrepancies of figures concerning the recovered assets, claiming that Magu was not transparent enough in the management of recovered assets.
But Magu is fighting back and his supporters within the Presidency said ” removing Magu at this time when he has given muscle to Buhari’s anti-corruption fight would be a mistake.”
“It is painful that the EFCC boss is facing certain powerful forces who have decided to remove him in spite of his remarkable achievements,” sources stated.
A Magu supporter said:” It will interest you to note that Malami accused the EFCC boss of disclosing a total naira recovery of N504 billion but lodged N543 billion in the Recovery Account with the Central Bank of Nigeria, CBN.
“Incidentally, this exceeded the disclosed figures by N39 billion.”
According to the supporter of the EFCC boss, what should be a point of commendation is now being used against Magu.
Magu has been acting chairman of the EFCC since 9 November, 2015.
He twice failed to scale through Senate confirmation during the Saraki 8th Assembly.