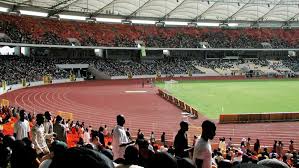 The FCT Administration has said that it will partner with the Federal Ministry of Youth and Sports Development for the rehabilitation of the Moshood Abiola Stadium in Abuja for it to be utilized to its fullest potentials.
Minister of the FCT, Malam Muhammad Musa Bello, made this disclosure when he received Mr Sunday Dare, the Honourable Minister of Youth and Sports in his office on Thursday, 18 June,2020.
According to Bello, “The stadium is a very important public monument in Abuja which he said has not served its full potential. He said that after the Nnamdi Azikiwe International Airport, the stadium is the second most iconic public edifice in Abuja, noticeable immediately upon arrival into the city”
On working with the Sports Ministry to rehabilitate the stadium, Malam Bello said “ rehabilitating the stadium is going to be in our own joint interest, not only as an Administration but as a people … particularly now that it’s very clear that moving abroad for holidays or for short trips that was the popular pastime of many in Nigeria, is not going to be as it used to be”
Malam Bello Continued “As a matter of fact, in the last two and half months, flights have not flown out or come into this country. So, it is now that we will start to appreciate the beauty of what we have across the country. Each time I go to the Moshood Abiola National Stadium, I feel very delighted and proud that we have something like this in Nigeria”.
He advised the Sports Ministry to work out a long term sustainable plan with the private sector to open up the various facilities in the stadium for public use.
While offering the expertise of the relevant departments of the FCTA for the rehabilitation process, the FCT Minister said that attention should be focused on vegetation control, waste evacuation and lighting. According to him, the stadium is exceptionally beautiful when lit up at night. He said that if the rehabilitation works are done properly, the stadium can really become a city within a city and be a major tourist destination within the country.
Speaking earlier, the Minister, Ministry of Youth and Sports Development, Mr Sunday Dare, said that the Moshood Abiola Stadium was one of the four Federal Government stadia across the country and the Ministry is committed to ensuring that the iconic monument came back to life and full functionality for the benefit of the sporting community and the entire country.
In the words of the sports Minister, “the stadium as it is, is not just for sports men and women alone. It is built in such comprehensive way that it is a city within a city with a the 5,000 capacity parking lot, a 64,000 capacity sitting arena, 54 executive suites furnished, all locked up that can be rented and given out; about nine different football practice pitches, Olympic sized swimming pool and eight massive generators. We have a stream that runs across it and a massive expanse of land to build a five-star hotel. We want to turn it into a piece of real estate and a sporting facility that will be the pride of this country and the pride of Africa and we think that the FCT will be a worthy partner”.
In attendance at the meeting were the Permanent Secretaries of the FCTA, Sir Chinyeaka Ohaa and the Ministry of Youths and Sports Development Mr Gabriel Tanimu Aduda and other senior members of staff of both organisations.