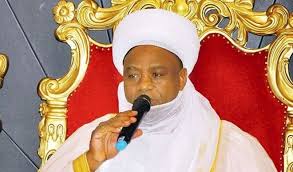 Sultan of Sokoto, Alhaji Sa’ad Abubakar lll, has decried the persistent killing of people in the country by bandits and insurgents, saying many have been sent out of their ancestral homes.
Abubakar who is also the President-General of the Jamaatu Nasril Islam, said the spate of insecurity in Nigeria, with particular reference to the North, should give those in government at federal and state levels great concern.
In a statement by JNI’s Secretary General, Dr Khalid Abubakar Aliyu, the monarch also appealed to security agents to put in more effort in curbing the issue of insecurity across Nigeria.
The statement reads partly: “The repeated massacre of people, as well as the senseless burning of houses and livestock in Borno, Katsina, Sokoto, Zamfara, Niger states and indeed other states such as Adamawa, Kaduna and Taraba, should give governments and its functionaries at both federal and state levels sleepless nights.
“By now, an instantaneous pronouncement followed by robust actions should have been made by the government of the day, not verbal warnings and condemnations dished out to the perpetrators of the murderous acts.
“Isn’t the government of the day a popular government? Is it not a participatory government?
“Why doesn’t public opinion(s) matter to it? Or isn’t public opinion(s) considered an ingredient to the government of the day?”
The Sultan’s remark is coming at a time President Muhammadu Buhari urged Nigerians declared that his capable of dealing with terrorism and banditry in the country.
He called for patience from Nigerians as the military explore areas to deal with the menace of insurgency and banditry.
A few days ago, a coalition of Northern youths had given Buhari 14 days to end insecurity in the region.
They had vowed to take over the government, if Buhari failed to end insecurity in the region within the ultimatum given.