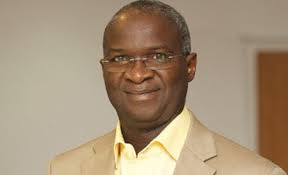 The Federal Government has concluded arrangement to concession 10 major highways across the country.

Minister of Works, Babatunde Fashola, SAN, while presenting details of the plan to the National Assembly Joint Committee on Works, made this assertion on Wednesday.

Fashola told the lawmakers that the project titled, “Highway Development and Management Initiative,” was anchored on a private sector engagement.

The Minister said investors would carry out the development and management of the road networks, adding that the rationale behind the private sector engagement was to provide an avenue to mitigate paucity of funds.

He said the first phase of the project would attract a capital investment of N163.32bn at a cost of about N16bn per each of the 10 roads, saying that about 23,322 jobs would be created in the first phase.

He said the investors are expected to provide streetlights, toll plazas, rest areas, and weighbridge stations.

Meanwhile, the Lagos-Pen Cinema axis in Agege had been closed to accommodate construction work on the Fly-Over Bridge in the area.

Lagos state Commissioner for Transportation, Dr Frederic Oladeinde, said the closure was effective to allow contractors to launch beams across Iju Road without any interruptions.