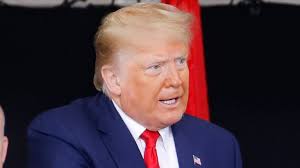 President Donald Trump of the United states, U.S. will sign an executive order on Tuesday, which seeks to improve how police officers treat African Americans and other people of colour.
This is coming after protests sparked up across the country following the killing of an African American man, George Floyd recently by the police.
Earlier, Trump had faced criticism from Democrats for his response and handling of the protests.
Senior administration officials said the executive order will incentivize police departments to improve by tying federal approval of discretionary grants to good policing practices.
Police departments will also employ the latest standards for use of force; improve information sharing so that officers with shoddy records are not hired.
“We’re going to be talking about things that we’ve been watching and seeing for the last month and we’re going to have some solutions,” Trump told reporters on Monday.
Law enforcement officials and families of people who have been killed by police are expected to be part of the event where Trump will sign the order.
“We’re not looking to defund the police. We’re looking to invest more and incentivize best practices,” one administration official said when describing the order to be signed on Tuesday.