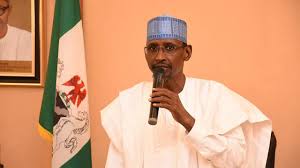 Federal Capital Territory Administration, FCTA, has charged residents of Abuja to take personal responsibility for their health and desist from violating the extant guidelines put in place to curtail the spread of COVID-19 pandemic in the Territory.
FCT Minister, Malam Muhammad Musa Bello, issued this warning while reacting to the illegal music concert held at the Jabi Lake Mall on Saturday, 13 June, 2020.
In his words, “Videos of the event which are still circulating on the social media clearly showed a concert going on with music and live performances by a band and dancers. The video also showed attendees dancing to the live performances on the elaborately constructed stage”.
He reiterated that several aspects of the guidelines as postulated by the Presidential Task Force on COVID 19 as well as the FCT Administration were violated with reckless abandon.
“For purposes of emphasis”, said Malam Bello, “the PTF and FCTA’s guidelines clearly states that there shall be no gathering of more than 20 people outside of a workplace or places of worship.
“There should be mandatory use of face masks when in public
“There should be social distancing of at least 2 meters between 2 people while in public.
“There is a ban on all congregational events such as parties, weddings, concerts among others.
“There is a closure of all clubs, bars, gardens, beer parlours, recreational parks, communal sports facilities, movie theatres and so on”
The guideline also stated that markets and business premises are to remain open between 8 am and 3 pm, adding that ban on interstate travel is still in force.
According to Malam Bello, The FCT Administration views the actions of the organisers and attendees at this concert as reckless, wicked, insensitive and utter disrespect and disregard both for the law and the wellbeing and welfare of fellow citizens.
He also added that the FCT Administration which has a responsibility to protect the lives of the citizenry is determined to prosecute all those involved in orchestrating these infractions to the full extent of the law.
The Minister also noted that there is a very real possibility that a single positive individual at that event could by now have gone ahead to infect several others thereby leading to a possible exponential spread.
The Minister further reminded residents that COVID-19 is real and the disease has proven to be fatal. More worrisome he said is the fact that the number of new infections has been on the rise in the country and the FCT. He expressed dissatisfaction with the non-adherence to basic-COVID-19 guidelines.
He said “It is disheartening to see residents not adhering to even the basic guidelines of facial covering, social distancing and hand washing or sanitizing. These guidelines have been put in place in order to save and safeguard lives”
“Adherence to the guidelines could be the difference between life and death. This therefore begs the question; whether that concert or party which is clearly against the law is worth the health or life of a citizen. Clearly, no concert or party is worth the life of anyone” Malam Bello said
The FCT Minister also encouraged residents to report to the relevant authorities when they notice infractions of the guidelines as the FCT Administration will embark on stricter enforcement measures.