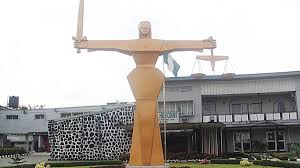 Federal High Court in Abuja, the Nigeria federal capital, has fixed 30 June to deliver judgment in the suit filed by Sen. Dino Melaye, challenging the passage of Infectious Diseases Bill already at the lower chamber of the National Assembly.

Justice Ijeoma Ojukwu of the Federal High Court fixed the date for the judgment after taking argument from the two parties involved in the case.

The bill seeks to empower the Federal Government to convert any property in the country, including private property to isolation centres.

The bill, which is sponsored by the Speaker of the House of Representatives, Femi Gbajabiamila and two other lawmakers; Pascal Obi and Tanko Sununu, also seeks to empower the government to, upon mere suspicion that a person is infected with an infectious disease, arrest and detain the person for as long as necessary, among others.

News Agency of Nigeria, NAN reports that Melaye had, on May 5, claimed that the provisions of the Bill violate his fundamental rights, among which are rights to the dignity of person, personal liberty, right to private and family life, right to freedom of movement and right to own immovable property in Nigeria.

In this suit, the clerk of the National Assembly is the 1st respondent, Speaker of the House of Representatives, Attorney General of the Federal, AGF and the Inspector General of Police, IGP are 2nd, 3rd, 4th and 5th respondents respectively.

Justice Ojukwu had, on June 1, adjourned the matter until June 15 while advising parties to restrain themselves from actions that could jeopardise the suit.

Earlier, Counsel to Melaye, Nkem Okoro told the court that the matter was for continuation of hearing as he urged the court to grant all the reliefs sought by his client in the application.

On the other hand, Kayode Ajulo, Counsel to the Speaker of House of Representatives, Femi Gbajabiamila; lawyer to the AGF, M.L. Shiru and Kehinde Oluwole, who represented IGP, urged the court to strike out the matter for lack of merit.

They argued that a bill, which was yet to become a law, could not have infringed on the plaintiff’s fundamental rights.

In her argument, Shiru, who represented the AGF, stated that the country’s constitution provided for separation of powers among the three organs of government.

“And in explaining this doctrine of separation of powers my lord, we refer the honourable court to the case of AGF and Guardian Newspapers.

The citation is supplied in our preliminary objection my lord,” she said.

According to her, in view of the principle of separation of powers as applicable, we are quite aware that the honourable court can interfere in legislative processes when there is only a defiance from the provisions of the constitution.

“However, this power can only be exercised in respect of enacted laws and not legislative bills and we urge your lordship to uphold our submissions in the preliminary objection and decline to grant the reliefs of the applicant,” she remarked.

She stressed that the National Assembly had the powers to make and amend laws as provided by the constitution.

The lawyer said although, Melaye had laid emphasises on Sections 6, 29, 30 and 47 of the proposed bill, as she urged the court to “dismiss all the reliefs sought by the applicant on the provisions of the bill as vexatious and annoying.”