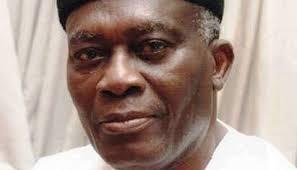 Former Federal Commissioner for Works, Major-General Orho Obada died at the age of 81.
Obada, who also served as the Commissioner representing Delta State in the Federal Revenue Mobilisation Allocation and Fiscal Commission in 2006, reportedly died on Saturday night after a brief illness.
Until his transition, he was the Chairman, Board of Trustees of the apex socio-cultural umbrella body of the Urhobo Nation, Urhobo Progress Union.
According to the sources within UPU, who confirmed his passage to journalists in Warri on Sunday, revealed that Obada was born on April 4, 1939,
The deceased, who hailed from Agbarho Kingdom in Ughelli North Local Government Area of Delta State, retired from the Nigeria Army in 1977.
Among other military formations, he once served as the General Officer Commanding (GOC) 82 Division, Enugu.
Obada was a distinguished old student of Hussey College, Warri (1958) from where he moved to the Regular Officer Training School, Teshie, Ghana, and subsequently to the Royal Military Academy, Sandhurst, England at the beginning of his military career.