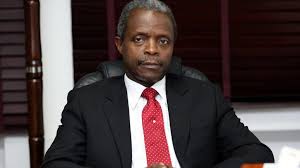 Vice President, Prof. Yemi Osinbajo, on Wednesday commissioned the operation of Dukia Gold and Precious Metals Project, DGPMP that would enable Nigeria to mine her gold reserves properly, trade responsibly and refine locally.
Osinbajo, who performed the virtual commissioning of the project, said Nigeria has potential reserves of 200 million ounces of gold reserves.
The Vice Presidnet disclosed that the DGPMP has been seven years in the making and it was his pleasure to see that the project is ready to begin operations.
In a statement made available to journalists by the Director of Press, Ministry of Mines and Steel Development, Mr. Edwin Okpara, said: Buhari said, “I believed that the Dukia gold project would encourage the emergence of smaller-scale mining companies who, for the first time, would have a transparent and welcoming market for their mined gold and precious metals. This would create jobs and unleash the economic potential of mining communities.”
He added that the project “will create primary employment for local artisanal miners and mining cooperatives across the solid minerals value chain. Off-take agreements between DGPMP and local mining communities and owners of recyclable gold will be a useful provider of jobs in our post COVID-19 economy.”
Osinbajo also commissioned the Dukia-Heritage Bank Gold and Precious Metals Buying Centres, which is part of valuable private sector collaboration.
He opined that the buying centre would provide a sustainable way for Nigerians to exchange their gold jewelry and other precious items for cash. “This system of exchange not only helps to encourage a culture of recycling, but will also serve as a complementary source for the raw materials needed for the Dukia Gold & Precious Metals Refining Company.”
Osinbajo promised that the federal government would provide support and facilitate policies that would ensure successful deployment, implementation, and sustainable operations of the Dukia gold project as well as continuous support of the mining sector.
In his remarks, The Minister of Mines and Steel Development, Mr. Olamilekan Adegbite, said the launch of Dukia-Heritage is a testament of the unwavering effort of President Muhammadu Buhari’s administration to serve as a business friendly regulator by providing the enabling environment for business to thrive.
Adegbite stated that the Buying Centre Initiative (BCI) would bring about efficiency and transparency to physical trading and transactions of mineral commodities in the country.
According to him, the buying centre would ensure that artisanal miners would receive the right pricing for their goods relative to illegal off takers.
This, he believed, would break the status quo of illegal mining and increasing royalty revenue accrual to the federal government.
The minister said his ministry has licensed two gold refineries and created conducive fiscal and regulatory enabling environment for them to thrive. “We expect that these two refineries will create ample employment opportunities in the downstream sector and in the gold value chain.
“Dukia is one of the two duly licensed gold refiners in Nigeria. They have developed an encompassing ecosystem, consisting of nationwide buying centres alongside the virtual purchasing platform that together form an integral centre-piece,” Adegbite said.