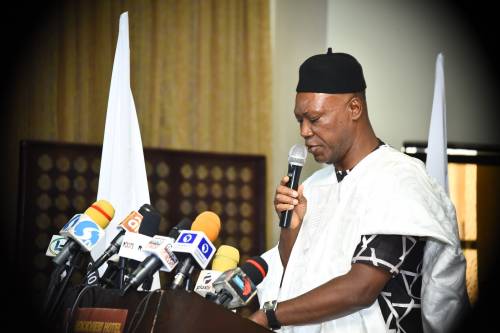 The legal crisis over the leadership of Inter-Party Advisory Council, IPAC, an umbrella body of all Nigeria registered political parties, has been resolved in favour of Dr Leanard Nzenwa by the judgment of a High Court of the Federal Capital Territory, FCT, Abuja.
Delivering a judgment on Monday, 8 May, 2020, Justice Binta Mohammed upheld the emergence of a new President for IPAC and declared Dr Leonard Nzenwa the National Chairman of the African Action Congress, AAC as the valid and authentic National President of IPAC.
Justice Mohammed declared as illegal the continued stay of Chief Peter Ameh as the Chairman of the IPAC, since his party, the People’s Progressive Alliance, has been deregistered by the Independent National Electoral Commission, INEC.
Shortly after the INEC deregistered 74 political parties, the remaining 18 parties came together and passed a resolution to appoint interim management chairman to run the affairs of IPAC.
Not satisfied with the resolution, the National Unity Party, NUP rushed to court to challenge the decision of the 18 political parties.
In the suit, the NUP prayed the court to declare that the interim management committee put in place by the 18 political parties was not validly elected and, therefore, cannot run the affairs of IPAC.
The NUP also prayed the court to declare that the interim management committee cannot function side by side with the executive committee led by Peter Ameh.
After listening to the submissions of counsel in the matter, Justice Mohammed, in her judgment, said the 74 political parties, having been deregistered, cannot continue to be a member of IPAC.
The court held that ‘membership of IPAC is predicated on being a member of a political party. There is no way a person who is not a member of a political party can be a member of IPAC.
‘A deregistered political party cannot contest or sponsor a candidate for election. The said Ameh was a former chairman of PPA and since his party has been deregistered or no longer in existence, he can no longer be the chairman of a political party.
‘His continues stay in office is tied to his being a member of PPA and since his party has been deregistered, he ceases to be IPAC chairman.
His stay in office is automatically void. You cannot put something on nothing, it will surely collapse. The number of registered political parties in Nigeria now is 18.
‘The 18 parties can only choose leaders among them. There is now a vacancy in the office of the chairman of IPAC since PPA has been deregistered.
‘The 18 parties have the power to appoint an interim management committee since they are the remaining political parties in Nigeria today. The claimant has not shown how the appointment of the respondent violates the laws of IPAC.
‘The respondent should continue to enjoy his position as the interim chairman of IPAC, pending when the election will be conducted. This court, hereby, restrains the claimant from interfering with the duties of the respondent as the interim management chairman of IPAC.’
The judgment has finally laid to rest the controversy that arose following the deregistration of 74 parties by INEC on who between Dr Leonard Nzenwa of AAC and Chief Peter Ameh of PPA who is the authentic President of IPAC.