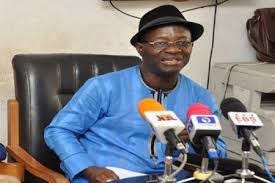 Edo State Commissioner for Information and Orientation, Paul Ohonbamu, has resigned from Godwin Obaseki’s administration.
Ohonbamu, in his resignation letter, which was addressed to Obaseki, thanked him for the opportunity to serve the state.
He said: “I hereby tender my letter of resignation as a commissioner in Edo State to His Excellency, Mr. Godwin Obaseki, this 4th day of June, 2020.
“Without setting a precedent, I have decided to step aside as cabinet member and operate outside‎ it for the general good of Edo State and pursuit of happiness for the citizens”.
The former information commissioner, a lawyer, also expressed gratitude to Obaseki for indulging him in his purposeful and sophisticated administration.
He thanked the ever loyal members of the Edo state executive council, stating that he was particularly delighted that the governor’s re-election bid was firm and surefooted.
Ohonbamu added: “Whether we shall meet again I know not. Therefore, our everlasting farewell take. If we do meet, while we shall smile, if not, it is true this parting was well made.”
He confirmed writing and signing the resignation on phone with our reporter, but declined to disclose the real reason for throwing in the towel.
It was gathered that Ohonbamu resigned for being sidelined, especially with Edo governor’s Special Adviser on Media and Communication Strategy, Crusoe Osagie, taking over his duties, which he had endured for so long, but got fed up and he decided to quit.
Osagie’s mobile line was not available as at press time, to react to the allegations.
On April 25 this year, Obaseki’s ex-Chief of Staff, Chief Taiwo Akerele, an indigene of Igarra in Akoko-Edo Local Government Area of Edo state, threw in the towel for also being sidelined, in view of his clamour for reconciliation between Edo governor and his benefactor, Comrade Adams Oshiomhole, the National Chairman of the governing All Progressives Congress, APC.
Two months earlier, Edo governor’s Senior Special Assistant on Anti-Human Trafficking Issues, Solomon Okoduwa, also resigned for undisclosed reasons, but said he decided to move on and to explore other opportunities.