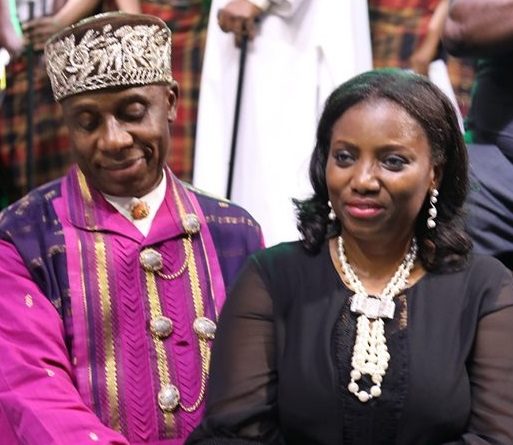 Wife of the Minister of Transportation, Mrs. Judith Chibuike Rotimi Amaechi, while felicitating with her husband at 55 birth day, gave glory to God for blessing her with such a wonderful husband.
Mrs. Judith Amaechi further expressed her profound appreciations to all the participants, especially the distinguish personalities, Heads of Government, friends and those from entertainment industry.
She also thanked all the Heads of institutions, and every single person that celebrated with them on the occasion of her husband’s birth day.
According to her, “I also want to thanks friends from all over the world and all those whom have found time to speak and write to us on this wonderful occasion”
She said, “In fact my phone has been busy and I have been receiving calls and messages from all around the country from entertainment industries, heads of government and well-wishers, I have received over 3000 messages which makes me wonder if I was the celebrant.
“But to the glory of God, I am celebrating because it’s not easy to have God bless a man for 55 years but I want to say that my heart is so blessed.
“I want to say in a very special way, I may not be able to call your names one after the other that without your support, without your comfort, Rotimi Amaechi wouldn’t have been where he is today.
“Haven spoken from my heart, may you find people that will speak to you from their hearts”
She went further to pray for her husband and the rest of the guests, “To all the women in the world and every one of you God bless you”
Also, the Publisher/CEO, Ovation Magazine, Sir Dele Momodu, when given the chance to speak said: “Everyone has spoken of the courage of the celebrant that is an understatement. There are just too many examples of his courage and it got him into trouble a couple of times.
“I remember one day in Accra Ghana, he called me out of the blues and I panicked so much because by then he was already against the Jonathan’s administration, and it was a free for all fight. You won’t believe it, I was dressing inside my car, he said, can you come right away and when he talks like that, you wonder what happens.
“Only to get there, him and his aides, someone has stolen all their passports. And they were supposed to going back to Nigeria and it became a problem, but he never panicked, he was calm and it was sorted out”
He further added that: “In time of dependability, I remember my 50th birthday 10yrs ago; I was in our garden in London, and who walked in quietly, Governor Rotimi at the time. I couldn’t believe it, he and my other friend, Senator Kuyomi I met at a time.
“He came again on my 55th birthday, 5yrs ago he said that I should meet him in Lagos at Radison Blue, and when I got there I saw the whole place was in darkness, I said what’s going on here only to meet my wife and my children, you won’t believe I was crying like a baby.
“Though I was hoping that I could retaliate the same way he did on my birthday.
“For Me in the area of performance, if you have a leader who cannot perform, then it is a waste of time. One thing I know about my friend and brother is give him many assignments, he will do it to the best of his abilities and I want to congratulate you for not letting us down, for not disgracing your friends. He said.
He further added that: “A lot of people will say you are a leader, but you are not a leader if you cannot perform. I will not want to take too much of your time, since I met you as a speaker, and we’ve been together.
I pray that as Amaechi celebrates his birth day, God will continue to bless him and his family in many years to come.