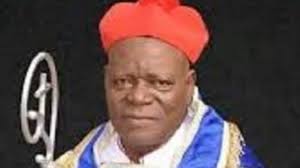 Christian Association of Nigeria, CAN Chairman Nasarawa State Chapter, Bishop Joseph Masin, kidnapped last week has been released.
Bishop Masin was released at about 11pm Saturday and was reunited with his family in Lafia at exactly 1.48 am on Sunday.
The clergy, according to one of the sons, Pastor Sam Joseph, in a telephone conversation with newsmen in Lafia said Bishop Joseph Masin arrived home to reunite with his family in Lafia at 1:48 am this Sunday morning.
Bishop Joseph maintained that his father was at the moment so weak and tired due to the long distance trekking he was subjected after his release by his abductors.
Bishop Sam Joseph who however admitted that ransom was paid could not say how much that was paid for his release.
According to CAN chairman son, Bishop Masin was also released in a hurry due to pressure from the security agencies especially the Nigeria police.
When contacted, the commissioner of police, Nasarawa state command, Bola Longe confirmed the release of the CAN Chairman kidnapped last week.
Longe who denied having knowledge on whether ransom was paid attributed the successful rescue of the CAN Chairman to intelligence information at the disposal of the command.
The CP who warned criminals to stay clear from Nasarawa state however called on the public to always assist the police with useful information that could help the police serve them better.