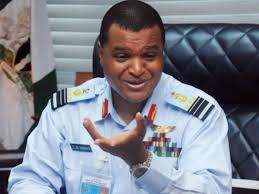 The Nigerian Air Force, NAF has made the first safe landing at the Damaturu International Cargo Airport in Yobe State.
The Chief Air Staff, Air Marshal Sadique Baba Abubakar was on board of the aircraft with aviation registration number, NAF 961 which made it safe landing on Friday afternoon.
Speaking with newsmen, the Chief of Air Staff, Air Marshal Sadique Baba Abubakar said the airport will serve as a springboard for the air force to efficiently and effectively execute the ongoing counter-insurgency operations in the northeast.
Governor Mai Mala Buni also said the International Cargo Airport when completed will connect the state with the rest of the world.
Governor Mai Mala Buni alongside the Air force boss boarded the NAF aircraft to Abuja.
Similarly, another aircraft with aviation registration number N100EK conveying some passengers made another safe landing at the airport and later took off.
The multi-billion Naira cargo airport is now about 80% stage of completion and it is the first of its kind in the northeast sub-region.