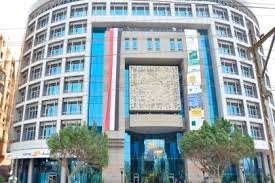 The Federal Capital Territory Administration’s efforts at encouraging direct foreign investment in the Territory received a major boost with the planned establishment of a world class 500 bed medical center in the city.
The medical center, to be established by the African Export-Import Bank (Afreximbank) is to be situated on a 5.1 hectre plot of land within the proposed Abuja Medical City Development Project in the Lokogoma District of Abuja.
Presenting the Certificate of Occupancy of the Land to Mr Abdoulaye Kone, the Reginal Chief Operating Officer of the Bank, the Honourable Minister of the FCT, Malam Muhammad Musa Bello, expressed the appreciation of the FCTA to the Bank for the choice of Abuja for the establishment of the Medical center.
The Minister, who took a tour of the site with senior management staff of the FCTA said “We feel highly honoured that the African Export-Import Bank has decided to establish this very important medical facility in Abuja, the centre of Nigeria’s unity. We also feel very humbled that God has chosen all of us here to be a part of the initial phase of this project”.
Malam Bello also pledged the commitment of the FCT Administration to the completion of the project. He said “I want to assure the African Exim Bank that all the organs of the Federal Capital Territory Administration will give you its fullest support to make sure that this project sees the commencement, construction, completion and final commissioning by the grace of God Almighty”
The Minister also thanked all staff of the FCT who worked hard to ensure that all the modalities for the establishment of the proposed medical center was in place and also urged the bank management to commence work on the site as soon as possible.
Speaking on receipt of the Certificate of Occupancy, Mr Abdoulaye Kone expressed the appreciation of the Bank’s President and Chairman of its Board to the FCT Administration and the Federal Government of Nigeria for expediting action in the issuance of the necessary documents including the C of O required for the establishment of the medical center of excellence.
He said “we accept with gratitude and thanks the Certificate of Occupancy and it would be presented to our President as soon as possible, with your message that we should start the work on ground. We have already mobilized the workers and they are on standby. They would be here, by the grace of God, on Monday (1st June) to start clearing the place and the ground breaking is also planned for the last quarter of the year”
Also speaking, the Acting Secretary of the Health and Human Services Secretariat, Dr Muhammed Kawu said that the Center should minimize medical tourism by Nigerians and save much needed foreign exchange, in addition to improving the knowledge and technical capacity of Nigerian medical personnel.
The African Export-Import Bank which has its headquarters in Cairo, Egypt, is a Pan-African multilateral trade finance institution.