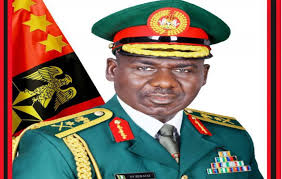 The Nigerian Army has disclosed that troops of Sector 1, Operation Lafiya Dole, have killed 9 terrorist fighters in what it described as successful ambush operation against identified Boko Haram terrorists crossing point at Mainok-Jakana axis in Kaga Local Government Area of Borno State.

Acting Director Army Public Relations, Colonel Sagir Musa in a statement said two soldiers were slightly wounded during the ambush operation, but was silent on whether they had been evacuated for treatment.

This is even as troops of Operation Safe Haven killed Mr Rinji Peter Bala, a third year undergraduate student of University of Jos.

Colonel Sagir Musa added that two gun trucks mounted with anti-aircraft guns were captured from the terrorists, while exploitation operation is ongoing by the troops.

He assured that the situation in the area has been normalized.

In a separate statement however, the Media Officer, Operation Safe Haven, Major Ibrahim Shittu regrets the unfortunate death of a civilian by name Mr. Rinji Peter Bala by its personnel.

Major Shittu said that a thorough investigation is ongoing to unravel the circumstances surrounding the incident.

The statement reads in part, “At about 10pm on 12 May 2020, information was received on the activities of suspected armed robbers and cultists operating around No 18th Street, Jos South LGA of Plateau State. The report revealed that the criminals took advantage of the lockdown and curfew to perpetrate crimes. Consequently, Sector 1 patrol troops of Operation Safe Haven swiftly responded and arrested 7 suspects, which were immediately moved to the Headquarters Sector 1 for preliminary investigation. Thereafter, 5 out of the 7 suspects were cleared and asked to leave the premises. Unfortunately, as they were leaving the premises, one of the personnel on sentry duty mistook them for escaping suspected and thus opened fire on them, which led to the death of Mr. Rinji Peter Bala”.

The statement disclosed that the Mobile Police (MOPOL) personnel involved in the incident has been arrested and detained accordingly.

Major Shittu noted that the high command of Operation Safe Haven has condemned the sad incident, while it has also sent a high powered delegation to visit the parents of the deceased and commiserate with them.

He assured the public that leadership of Operation Safe Haven will ensure that justice is done on the tragic episode.