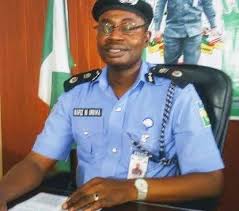 Delta State Police Command, has arrested two suspected child traffickers who allegedly sold a newly born male child to a trafficker in Onitsha, Anambra state.
The Police has also arrested 182 suspects involved in various crimes in the state, ranges from armed robbery, kidnapping, cultism, murder, stealing, abduction and protests.
While parading the suspects before newsmen on Wednesday at the State Command’s headquarters in Asaba, the State Commissioner of Police, CP Hafiz Inuwa, said the two suspected child traffickers were intercepted and arrested while on transit in a commercial bus along Asaba/Benin expressway in Okpanam area.
According to him, On 28th March, 2020 at about 20 30 hours, two suspected child traffickers, one Tolulope Bosede ‘f’ 45 years and Abiola Komolafe ‘f’ 20 years both of Akure in Ondo state were intercepted and arrested by the Police while acting on intelligence.
“They were suspected to have sold a newly born male child delivered by one of them, Abiola Komolafe ‘f’ 20 years to a trafficker in Onitsha and were heading back to their base in Akure when they were arrested by the Police acting on information”, he explained.
CP Inuwa told Journalists that, ” upon investigation and following the confession of Tolulope Bosede that she tricked pregnant Abiola Komolafe from Akure to Onitsha where she successfully gave birth to a baby boy”.
“But she later took the baby from her and sold him to one Mrs. Nkaneme Melife ‘f’ 37 years in Onitsha while she lied to the mother that the baby died some hours after delivery”, he added.
Police Commissioner disclosed that the buyer, Mrs. Nkaneme Melife later sold the child to another buyer, Mrs. Ekunno Ifeyinwa ‘f’ 56 years of Onora family house Abba village, Onitsha.
Inuwa who averred that the two buyers were arrested with one Josephine Uñnoha ‘f’ said Police has recovered the stolen child.
“Their arrest led to the recovery of another two weeks old male child suspected to have been stolen from same Mrs. Ekunno Ifeyinwa ‘f’. The case is still under investigation”, he stated.
He listed the arms and ammunition recovered from the suspects to include 15 locally made cut-to-size barrel gun, 7 locally made pistols, one English made berretta pistol, five pump action gun, 14 Ak/47 rifles and one Ak/49 rifle.
Others he listed are five Ak/47 extra magazines; 3,323 live cartridges; two expended cartridges and 584 of 7.62mm live ammunition, amongst others.
The Commissioner, however assured Delta residents of adequate security, soliciting for their continuous understanding, support and cooperation with the state government and police authorities in the fight against crime and criminalities.