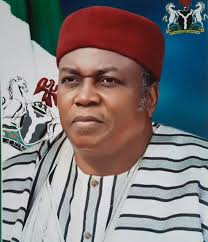 Stakeholders of Jukun and Tiv in Taraba state have reached a truce to end the lingering crisis bedevilling both communities in the Southern part of the state.

This form part of the fourteen-point communiqué signed by Governor Darius Dickson Ishaku, who was represented by his Deputy Haruna Manu, Representative of the Jukun, Barrister, Danjuma Adamu and that of the Tiv Barrister Jimme Yongu at a stakeholders meeting held at the Government House in Jalingo on Tuesday.

Presenting the Communiqué, State Deputy Governor Engr. Haruna Manu called for the end of all forms of hostilities in Southern Taraba maintaining that all defaulters will be dealt with decisively by the government.

The stakeholders called on the state government to deploy more security personnel to Donga Local Government Area to end conflicts in all affected areas in the southern zone.

They urged the state government to mandate the thirty man TIV and Jukun committee to continue the peace building process in conjunction with community leaders and submit report for consideration.

The stakeholders appealed to the state government to provide relief materials to victims of the recent crisis in Donga, who are now living in an internally displaced person’s camps situated in Donga, Kurmi and Bali Local Government Areas.

They urged the state government to facilitate the return of all the internally displaced persons to their homes as well as providing them with farming implement for this year’s farming season.

The stakeholders pleaded with government to expedite action towards the demarcation of boundaries between Taraba and Benue, build military base at Chonku and border villages stating that henceforth land disputes should be resolved by local government Council Chairmen.

They resolved to end hiring of militias and agreed to go back to their domain to talk to their people to douse the crisis, charging religious leaders to preach peace to their adherents and called on government to ensure that security issues are nip at the bud in the point where breakdown of law and order occurs.

The stakeholders also agreed to sue for peace in various media platforms, stressing that kidnapping and armed robbery are aftermath of conflicts which should stop.

Governor Darius Ishaku has held several meetings within and outside the state with the recent one at Lafia, Nassarawa state to end the lingering crisis between the Tivs and Jukun, an indication that he has continued to maintain his mantra for peace and development for the overall growth of the state.