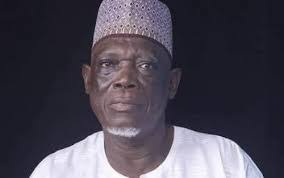 It has been reported that Wampana was Speaker of the defunct Gongola State House of Assembly during the second republic. He was also the Minister of State for Public Health under the Shehu Shagari administration in 1983. He died on Sunday, May 10th at his Abuja residence.

Senator Abbo, who headed the delegation, reacted to his death as he identified late Senator Wampana as a legend whose legacy will live for many years to come.

He said, Wampana single-handedly brought Federal Polytechnic Mubi. So, this is a great man that left a very big shoe that we would be struggling to fill”

According to Abbo, the world should know that Senator Paul Wampana left as a Hero, as a man that would be remembered for many years to come.

“He is not just a politician in Adamawa, he is a national and international figure. A man that God has given so much wisdom. A very brave man” Senator Abbo said.

In her message on the late “Legend”, Senator Aishatu Ahmed Dahiru Binani said Senator Wampana “rendered enormous services not only to the people of Adamawa State but the nation at large”.

Binani who also referred to him as a legend, said that one cannot count the number of initiatives that he came up with, which led to the progress of present Adamawa State and also the politics of Nigeria.

“Talking about the political history of Nigeria, it can’t be complete without mentioning Baba Paul Wampana,” she said.

Reacting to his death, Senator Binos Dauda Yaroe revealed that Senator Wampana “stood firm and insisted that I must be a member of the caretaker committee” when PDP was reorganised in 2017.

“I wish the family the peace of the Lord,” Yoroe said while praying for the family.