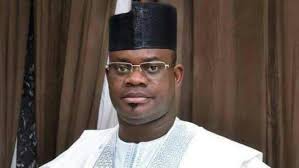 The leader of the delegation of the National Centre for Disease Control, NCDC, Dr Andrew Noah, sent from Abuja to Kogi state to carry out Covid-19 test was ordered to be quarantined by Kogi state Governor, Alhaji Yahaya Bello for for contravening the rules of NCDC.
The State Commissioner for Information, Mr. Kingsley Fanwo disclosed this in a statement issued late hours of Thursday night and made available to newsmen.
According to the statement, Dr Noah and his delegations left the state to avoid being subjected to COVID-19 test and for fear of their life.
Governor Yahaya Bello had ordered the leader of the NCDC delegation, Dr Andrew Noah to proceed on isolation for shaking hands with the Director of Protocol, government house, Sunday Ayenibe, shortly after he took microphone from him at a function in government house late night of Thursday.
The Governor explained that Dr Andrew had contravened the rules and regulations of NCDC as it affect covid 19 by shaking hands while collecting microphone from the Protocol Director and as such, he should be tested for Covid-19 since he was coming from the epicenter of the said disease.
“It was drama today at the Kogi State Government House as officials of the National Center for Disease Control sent to ascertain the COVID-19 status flee the state ” Fanwo stated.
He added that Dr Noah said that NCDC sent them to kogi to assist the state in responding to the challenges posed by the pandemic.
Explaiing further, he said the Officials were not ready to be tested for COVID-19, and went back to Abuja immediately.
He said that why the NCDC Officials feared being tested was a matter of concern to the Government of Kogi State.
The Commissioner therefore said that NCDC should come hard on its Officials for violating its rules.
“Today, the Governor showed the statesmanship in him once again by appreciating the support of the NCDC and defending the health interests of his people.
“NCDC quarantined the Chinese professionals that came to give them technical support and also took their samples for test. It is a normal practice and protocol set by NCDC.
“So NCDC will have a lot to explain as to why its officials refused to test for COVID-19. How can we be sure of their status? What are their fears? Why did NCDC sent people who are afraid of test to our State? What was their intention?
“The officials that came have done an integrity blow to the works of the NCDC. Is there something they are hiding? It is time NCDC opened up and apologize to the good people of Kogi State.
“How will they encourage people to test when it’s own officials are afraid of test? This is sad”.Fanwo lamented.
It would be recalled that the NCDC and kogi state government have been trading words against each other over the status of kogi state in respect of covid 19 pandemic.