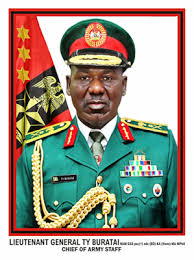 Military airstrike kills many terrorists, raze down their logistic headquarters in Parisu

The Nigeria Defence Headquarters, DHQ, said that its latest air onslaught against Boko Haram Terrorists in Northeast theatre of operations executed by the Air Task Force of Operation Lafiya Dole has killed many terrorists and razed down their logistic headquarters at Parisu in the Sambisa Forest area of Borno State.
DHQ added that the air strike was executed as a precursor to ongoing air and ground operations to clear remnant of terrorists hibernating in the area.
Coordinator Defence Media Operations, Major General John Enenche in a statement, assured that the Armed Forces of Nigeria will continue to sustain the offensive against the enemies of the country, until peace and normalcy are restored in all parts of Nigeria.
He said “In furtherance of our objective of restoring peace and security in the North East, the Armed Forces of Nigeria, through the Air Task Force of Operation Lafiya Dole, on 30 April 2020, neutralized some Boko Haram Terrorists (BHTs) and destroyed some of their logistics facilities at Parisu in the Sambisa Forest area of Borno State. The air strike, which was executed as a precursor to further air and ground operations, was conducted after intelligence reports revealed that the terrorists had resumed use of the settlement as a staging area to launch attacks against nearby troops’ locations.
“Recent aerial surveillance missions had also shown significant terrorist activities in the area whilst identifying some compounds housing the fighters and their logistics items”.
General Enenche said that the Air Task Force dispatched its fighter jets to attack the location, adding the Nigerian Air Force (NAF) jets, while taking turns to engage the target area, scored accurate bomb and rocket strikes, resulting in the destruction of some of the structures as well as the killing of several terrorists.