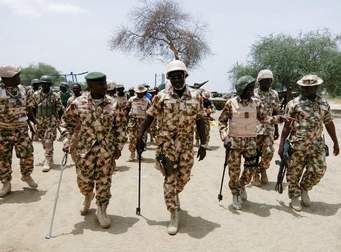 Nigeria Defence Headquarters, has disclosed that the troops of Operation Lafiya Dole in different encounter around Sambisa Forest in Northern Borno have killed 11 Boko Haram Terrorist fighters, loses one soldier with two others wounded in action.
It said that several other terrorists escaped with gun shot wounds, while many items including arms, ammunitions, motorcycles, cloths and copies of Islamic sacred literature were intercepted.
Coordinator Defence Media Operations, Major General John Enenche in a statement revealed that troops of Sector 1 Operation Lafiya Dole has in the last seven days engaged the Boko Haram Terrorists hibernating within its own Area of Operation in the theatre.
According to the statement, “Within the period, on 22 April, 2020, troops of 121 Task Force Battalion under 26 Task Force Brigade while in ambush position, made contact with BHTs at crossing point Pulka-Firgi road. One BHT was killed, One loaded AK 47 rifle recovered. Additionally, a motorcycle painted in Military colour along with one locally fabricated Hand grenade were also recovered”
in a similar development, on 24 April, 2020, troops of 192 Battalion of 26 Brigade deployed at Gwoza, while on night ambush operations came in contact with BHTs attempting to cross through the Mandara mountains to Sambisa Forest and in the ensuing fire fight neutralised 2 BHTs while several others escaped in disarray with gunshot wounds while a bicycle and 2 copies of the Holy Qur’an with assorted clothing items were recovered.
Also, on 27 April, 2020, troops of Echo Company 114 Bn in blocking position at Izge Response Area received information of BHTs attack at Yenegu village about 5 kilometres from own troops location.
On receipt of the information, the dogged troops swiftly mobilised and engaged the BHTs who fled due to superior fire power from the troops. No casualty was recorded by own troops while 2 BHTs were neutralised”.
General Enenche further explained that while 26 Task Force Brigade was hammering the terrorists along the mandara mountains, the gallant troops of 152 Task Force Battalion deployed at Kumshe under 21 Special Armoured Brigade engaged BHTs in a fierce fire fight with the BHTs who attacked their location on 22 April, 2020.
Unfortunately in the process, he asserted that one soldier paid the supreme sacrifice while another sustained gunshot wound.
He added that, 3 BHTs were neutralised, 1 motorcycle captured as others were suspected to have fled with life threatening injuries.
Eneche added that in another encounter, 3 terrorist were killed while one soldier sustained minor injury.