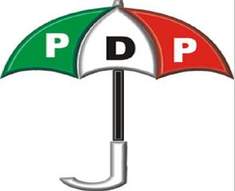 Peoples Democratic Party, PDP has expressed concerns over the hasty approval of yet another loan of N850 billion for President Muhammadu Buhari’s administration by the All Progressives Congress, APC-led Senate, despite allegations of financial recklessness and lack of accountability that have dogged the administration.
The party is further concerned that the Buhari-led administration had, in its incompetence, failed to articulate tangible wealth creation programmes to buoy the nation’s economy, despite the huge natural and human resources at its disposal, but relishes only in accumulating loans, without precise repayment plans, thereby pawning the economy as well as the future of our country.
In a statement signed by the Kola Ologbondiyan, National Publicity Secretary of PDP, Nigerians are alarmed that the Buhari administration’s over dependence on loans is wrecking the economy while amassing huge problems for the future generation.
According to the party, “It is even more worrisome that the loans are not transparently managed as most of them are being trailed by allegations of mismanagement and embezzlement”
The PDP holds that instead of constantly resorting to borrowing, the Federal Government should articulate innovative ways to create wealth and plug wastes.
“What is expected at a time like this is for the Buhari Presidency to immediately cut on luxury, slash the number of Presidential appointees, cut down huge allowances that gulp billions of naira and maintain a lean budget that will center on health, research and growth of our economy among other critical needs”
The PDP therefore charges the Senate presiding officers to note that in approving this loan, the nation holds them responsible to ensure strict oversight monitoring of the handling of the money.
‘This is especially as it is being sourced from the capital market, which hosts investments by private individuals and firms.
“The Senate must ensure judicious use of the funds as well as prompt repayment. This is because our nation cannot afford any default, as such is capable of crippling the capital market and worsening the economic hardship already being faced by Nigerians”
The PDP therefore urges all stakeholders, particularly fiscal transparency groups, the Nigeria Corporate World and management of the capital market to protect Nigerians by closely monitoring the performance of the loan to guarantee effective management and prompt repayment.