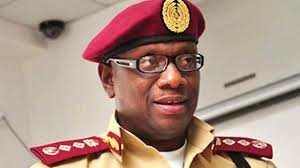 Owing to the imperatives of ensuring total compliance to the restriction order placed by the Federal Government to primarily avert unnecessary spread of the COVID-19 Pandemic; the Corps Marshal, Federal Road Safety Corps, Dr Boboye Oyeyemi has directed the Sector Commanders of FCT and Lagos State to work with their respective state authorities to ensure effective Mobile Court operations for violators of the Presidential Order.
This directive also applies to other states where mobile courts have been constituted by State Governments for the same purpose.
In a statement made available to Idealposts by Bisi Kazeem, the Corps Public Education Officer, the establishment of the Mobile Court has become necessary at this point in time seeing that the only proven remedy to the spread of the virus is for the citizenry to abide by the sit at home order. And for those who would intentionally decide to violate the order, the Mobile Court will serve as a deterrent.
Kazeem noted that Lagos State Mobile Court Operations have already outlined different penalties for defaulting individuals.
He gave the penalties as follows; For individuals arrested violating the order, they will be liable to paying the sum of N10000 as fine and also engage in community service for 7days.
Kazeem said Tricycle Operators who violate will pay the sum of N7,000, Cars N20,000, and Trucks N50,000, adding that all the fines also attract a 7day cumpolsory community service.
The Corps Marshal has mandated the Sector Commanders of the affected states to brace up with the present reality and cooperate maximally with the Government of Lagos State and the FCT Administration for effective implementation of the Mobile Court Operations.
In the Federal Capital Territory, Kazeem revealed that the Mobile Court will be operating at 3 different locations namely; Mpape, Dantata Bridge by Airport Road and AYA Round About.
He asserted that violators of the lockdown order will be tried and if found guilty, will be fined and their vehicles impounded until after the lockdown order is lifted.
Kazeem therefore cautioned that non essential workers who do not have anything doing outside should avoid leaving their homes as the Government is not ready to risk any further spread of the pandemic.