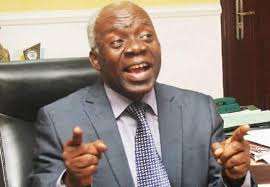 Human rights lawyer, Femi Falana, SAN has said that the Federal Government’s plan to continue with the school feeding programmes during the ongoing lockdown is an insult to Nigerians.
Falana stated this while reacting to a statement credited to the Minister of Humanitarian Affairs, Sadiya Farouq, whose ministry coordinates the programme.
Farouq had, in aligning herself with a presidential directive, vowed to work with state governments to develop a strategy to continue the programme despite schools being closed to halt the spread of COVID-19.
President Muhammadu Buhari in his speech imposing lockdown on Lagos, Ogun, and FCT late March, said, “Furthermore, although schools are closed, I have instructed the Ministry of Humanitarian Affairs, Disaster Management and Social Development to work with State Governments in developing a strategy on how to sustain the school feeding program during this period without compromising our social distancing policies.”
However, Falana reacting to the continuation of the programmes said it wreaked of insensitivity.
He told The Punch, “The Federal Government should stop insulting the collective intelligence of the Nigerian people. For goodness’ sake, are the school children being fed in their homes by the ministry of humanitarian affairs?
“The statement and other similar statements credited to highly-placed public officers during this crisis have compelled the Nigerian people to demand accountability in the school feeding and cash transfer policies of the Federal Government.
“Even though Lagos State warehouses the largest number of the very poor people in the country not a single person in the state has benefited from the cash transfer programme of the Federal Government.
“Hence, Lagos State is conspicuously missing in the social register compiled by the Presidency.”
Falana continued, “In his last broadcast, President Buhari announced the increase in the number of the people in the social register from 2 .6 million to 3 .6 million.
“The state and local governments must compile their own social register of poor people and liaise with the Federal Government with a view to ensuring a more effective way of distributing the palliative.
Nigeria’s confirmed coronavirus cases rise to 407
Nigeria has recorded another 34 new cases of Coronavirus, with the total figures jumping to 407.
According to the Nigerian Centre for Disease Control, NCDC, 18 of the 34 cases were recorded in Lagos.
Twelve cases were also recorded in Kano, two in Katsina, one in Delta and one in Niger.
Thirty-four new cases of #COVID19 have been reported as follows:
18 Lagos
12 in Kano
2 in Katsina
1 in Delta
1 in Niger
As at 11:20 pm 15th April there are 407 confirmed cases of #COVID19 reported in Nigeria. 128 have been discharged with 12 deaths