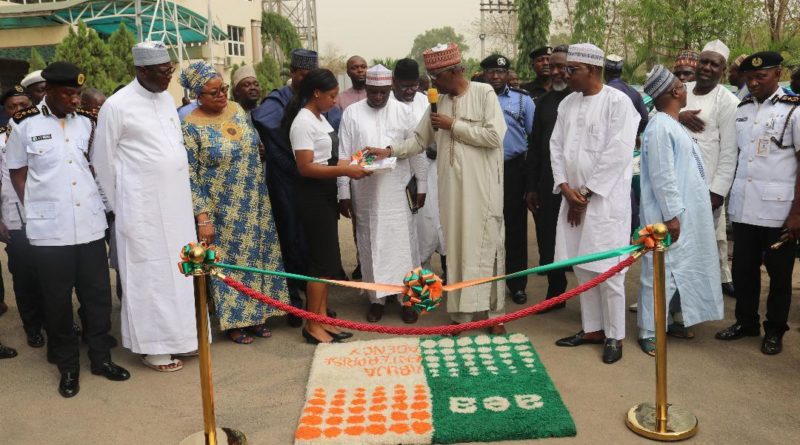 Following up on his promise to introduce palliative measures that would cushion the effects of the restriction imposed on tricycles, popularly known as Keke Napep in some parts of the Federal Capital City, FCC, the Minister of the FCT, Malam Muhammad Musa Bello, has facilitated the acquisition of 33 Nissan Saloon vehicles for commercial taxi operations in Abuja.

Bello, while flagging off the Keke Palliative Taxi Scheme in Abuja, said that the FCT Administration facilitated the acquisition through its small and micro businesses arm, the Abuja Enterprise Agency, AEA Limited.

He explained that 20 of the beneficiaries drawn mainly from the Keke rider’s unions, were trained by the AEA and profiled for access to finance which facilitated the acquisition of the vehicles they would use in conducting their trade.

The Minister further noted that a private sector company, MTI Taxi Limited also provided 13 vehicles for the scheme in collaboration with the AEA.

The FCT Minister who was represented at the flag-off ceremony by his Chief of Staff, Bashir Mai Bornu, said the beneficiaries of the scheme had been made to undergo adequate drive test as well as profiled for access to finance.

Bello also stressed that the gesture is a testament to the Administration’s desire to improve the wellbeing of residents in addition to creating an enabling environment for business to grow, through the provision of a well-structured transport system in the FCT.

He therefore commended the Abuja Enterprise Agency for facilitating the introduction of the palliative scheme, even as he praised the leadership of the Keke operators’ unions for collaborating with the FCTA to ensure the success of the scheme.

The Minister urged the beneficiaries to deploy the taxis in areas where tricycles have been restricted to cushion the effects.

Earlier in his address, the Managing Director/Chief Executive Officer, Abuja Enterprise Agency, Dr. Arabi Tukur said the agency trained 20 individuals selected by the Confederation of Tricycle Motor Operators Association, CONFACTRIMO in the FCT, on modules covering entrepreneurship to develop their business acumen, as well as provided a driver instruction class to test the proficiency of the drivers.

“Building on this, the agency also provided Technical Support for MTI Graduate Taxi Scheme, another private sector led scheme. We trained 19 people for the scheme who are Graduates that are willing to take up taxi driving for a business. They have all been trained on Entrepreneurship and Driving instructions. Out of the 19 trained, 13 have been profiled and were given funds by the agency for the acquisition of vehicles based on agreed and fulfilled terms and conditions,” he said.

The MD further noted that the beneficiaries of the scheme have been given four years to make full payment for the vehicles, after which they will become eventual owners.

He also disclosed that all the vehicles for the scheme have been marked, commercially registered and placed on tracking systems to eliminate any security concerns that passengers might have

Speaking on behalf of the beneficiaries, the Treasurer, Keke NAPEP FCT, Sanusi Usman, thanked God for the privilege to upgrade from Keke Napep riders to taxi owners, through the efforts of the FCT Minister.

He said, “When this incident happened to us and we were restricted from our areas of operation, we were disturbed and we were not happy actually. But by the grace of God, with this opportunity, we are now very happy and we are praying for this very Minister, we are praying that Almighty God help us bless this Minister and Nigeria in general.”

Usman further disclosed that the taxis were given to the beneficiaries at the rate of N3.8 million, adding that they have agreed to be making weekly payments of N23,000 for a period of four years, after which they will take full possession of the vehicles.