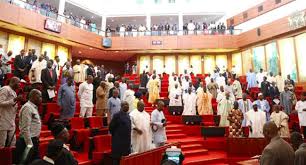 The Chairman Senate Committee on Federal Roads Maintenance Agency, FERMA, Senator Gershom Bassey, has said that the implementation of 2019 budget released was impressive.

He said this on Tuesday 10th March, 2020 during an oversight visit to FERMA by the Senate Committee on FERMA to ascertain the level of implementation of the budget releases for 2019.

Responding to questions from the press, the chairman said the purpose of their visit was to ascertain and ensure that the funds that were appropriated and released to FERMA in 2019 were appropriately utilized.

Senator Gershom said from their discovery, FERMA has completed most of it projects that were budgeted for in 2019 up to 98%, this he said was very impressive. He said, ‘’FERMA has done well in terms of completion of projects, they have utilized about 90% of the release for 2019, completed 98% of the projects. This is very good for any organization, this is a high rate performance’’.

The Chairman however said the Committee was not satisfied with the funding of FERMA, saying that the agency should get much more than it gets presently.

He said, “The budget should be much larger; this is an Agency that affects every single life in Nigeria. Road is the artery in which we live and breathe in Nigeria, we transport basically everything by road, we don’t have any other infrastructure as it is, the upkeep of these roads is key to us, if we give FERMA more funds, even one trillion naira, it is not too much to maintain our roads’’.

On his part, the Managing Director, FERMA, Engr. Nuruddeen A. Rafindadi, while appreciating the Senate Committee on the support so far enjoyed from them, said that FERMA can improve on the backlog of maintenance of federal roads across the country if there is an increase in the releases of monies appropriated to the Agency.

He said, ideally the Agency would require N125 billion every year to maintain federal roads across the nation. ‘’If you consider the asset value of our roads and bridges across the country, that is a modest sum to preserve the value of our national asset’’.

Rafindadi also said that the Agency had a target of intervening in about 3,500km federal roads in 2019, this was later increased to 5,000km, and that the Agency was able to meet the target which was presented and stated by the Minister of Works and Housing at the FEC meeting on the Ministerial report.

The Managing Director concluded by assuring Nigerians that the Agency under his watch will do all it can to put smiles on the faces of the people by making sure roads are put in motorable and safe state.