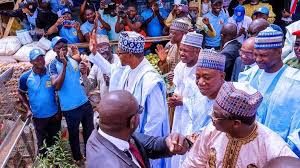 As the issue of insecurity in the country continue to be the major national concern, the Peoples Democratic Party, PDP has called for an immediate investigation into the reported security breach and suspected “attack” on President Muhammadu Buhari, by yet to be named individual, which on an official assignment in Kebbi state.

National Publicity Secretary of the Peoples Democratic Party, PDP, Mr. Kola Ologbondiyan, stated this in a statement made available to our correspondent on Friday.

The PDP, while condemning the security breach, noted that investigation was necessary given public apprehension over conflicting reports in various sections of the media on the frightening development.

The party stressed that the office and person of the President embodies the identity and sovereignty of our nation, adding that the safety of the President and his family members is therefore paramount and must not be compromised under any excuse.

The PDP described the incident as a national security issue and urged the Presidency to go beyond mere dismissal of the breach and give further information regarding the identity of the said individual, how he succeeded in beating the security around the President as well as his whereabouts since the incident.

The party is however worried that the security lapses around the President, leading to the breach, further shows the poor handling of security issues by the Presidency, which also spectacles in the ineffective management of overall national security under the current administration.

While urging Nigerians to continue to be vigilant at all time, especially at this trying time, the PDP however stressed that in as much as the citizens may be hurt over the hardship occasioned by the misrule of the present administration, resorting to acts of violence against the leaders, does not offer the needed solution.

The PDP however urged the President’s handlers to be more alert, professional and organized to forestall such security breaches in the future.