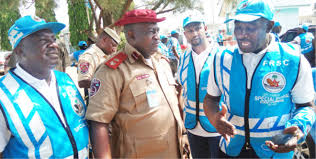 Federal Road Safety Corps, FRSC, has disclosed that one of its corporate strategic roles for the 2020 is to reduce road traffic crashes by 15% and fatalities by 20%.

Sector commander of the FRSC, FCT Command, Corp Commander Wobin Ayuba Gora, explained that for the FRSC to succeed in minimizing crashes and fatalities, a lot of measures have to be put in place to ensure it succeed.

On road traffic crashes, Gora stated that the corps has stepped up public education by intensifying efforts to ensure that motoring public are properly educated periodically on road traffic rules and regulations and how to make good use of the roads across the country with minimum crashes.

He asserted that they go to Churches, Mosque and other public places to educate motoring public on proper use of roads and as well caution them to drive safely so as to stay alive.

The sector Commander also disclosed that the FRSC has national traffic radio, which came on board in 2019 through where people make observations by calling 122 to state their views.

According to him, “In FRSC, on a yearly basis, we do come up with what we called, Corporate Strategic Roles. We have four of them this year and whatever we are doing for the whole of 2020, will be within the ambit of those four strategic roles”

“Of course, majorly among them is how to minimise the risk of death in road traffic and when you look at that as strategic role, you now look at what you will come up with to ensure you are able to do what just the strategic roles is saying.

“Don’t forget we have ambulance services which we called zebra. So, to any crash that happened, prompt intervention is expected of us to save lives. If the timing to that rescue is improved, then the previous year’s fatalities will be reduced to the barest minimum” he said.

Speaking on overloading of vehicles in the FCT, especially in the city centre, Gora said he has directed the Head of Operations in the command to specifically embark on special patrol to ensure that perpetrators are apprehended and made to face the wrath of the law.

“Our men are on that already. Some reasonable arrests have been made and I can assure you that those who were arrested carrying overload will definitely go for emotional evaluation test in the hospital before their vehicles are released” he said.