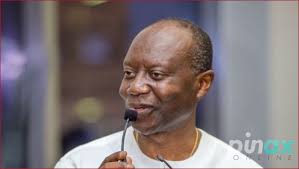 Occidental is seeking regulatory clearance for the deal and the tax bill is among matters still to be resolved, Ofori-Atta said by phone on Monday.

Houston-based Occidental agreed to offload to the French supermajor the African projects acquired in its $37 billion takeover of Anadarko Petroleum Corp. in August.

While Ghana and Occidental are yet to reach an agreement on the tax bill, the government expects that the matter will be finalized soon, said Ofori-Atta.

Ghana’s tax authority estimates Anadarko will make $2.5 billion in capital gains from the sale of the assets, he said.

“It’s an issue of seeking what’s in the sale for Ghana,” said Ofori-Atta. “It’s not any sort of a bellicose action.

“Occidental and Total did not immediately respond to a request for comment. Last week, Occidental said on its earnings conference call it’s continuing to work with the governments of Ghana and Algeria on the asset sales”

Total Chief Executive Officer Patrick Pouyanne said last month that Occidental was still in talks with Ghanaian authorities over the taxation of the transaction.

The Total deal is part of Occidental’s plan to sell at least $15 billion of assets by mid-2020 to help the company reduce the debt it took on to buy Anadarko.

Occidental said in last week’s conference call with analysts that there’s increased risk to both the timing and certainty of the sale of the Ghanaian and Algerian assets.

Algerian authorities have told Occidental that state-owned Sonatrach Group has the right to preempt the transaction. Elsewhere, the purchase of assets in South Africa and Mozambique has already been completed.