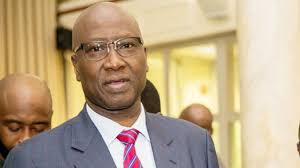 Secretary to the Government of the Federation, SGF, Boss Gidahyelda Mustapha, has said that the major challenge of the government remained funding and corruption, which needed to be surmounted for development to take place.

Mustapha stated this while delivering a welcome address on the occasion of the National Policy and Development Summit (N-PoD), held in Abuja, the nation’s capital.

He asserted that that strategies and human resource needed to enable government to succeed in its programmes are all available in the country.

He explained that the national challenges are more than the nation’s national income, adding that the afore-mentioned remained the major issue that must be overcome as a nation if Nigeria must make progress.

According to him, “Another challenge is the absorptive capacity of our national economy to support our developmental needs and plan at the movement. On a balance, our national challenges are more than our national income. It is a major challenge that must be overcome as a nation if we are to make progress.”

“Though the government has been challenged on all fronts, from security, absence of critical infrastructure, poverty to unemployment among others. The essence of the Next Level Agenda is to consolidate on the achievements of the last four.

“As a government we, are interested in solutions that will help propel Nigeria to the next level we envisaged. As you deliberate on these issues and many more therefore, it is hoped you would proffer solutions that would enable government to overcome these challenges.

Also the Minister of Transportation, Hon. Rotimi Amaechi in his presentation at the summit asserted that infrastructure is the cornerstone of economic progress, adding that road, rail, ports, airports and telecommunications remained drivers of economic activities globally.

“As the Minister of Transportation, the projects and interventions that will be cited will be the ones in the transportation sector (Rail, Ports, Inland waterways, and some roads corridor projects under the ECOWAS protocol).” He said.

The summit was attended by Ministers, captain of industry, Head of Department and parastatals among other stakeholders.