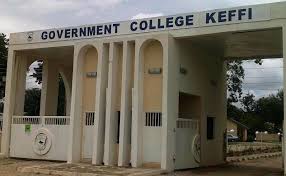 The college is among the oldest colleges in Nigeria and has produced people of timber and caliber like late President Umar Musa Yar’Adua, and the current Minister of Information and Culture, Alhaji Lai Mohammed among others.

Speaking with journalists at the occasion, a member of the association, Mr. Yahaya Suleiman (Town Bouncer), expressed joy and happiness for coming to celebrate the 70th year anniversary of the college after so many years.

Suleiman asserted that Government College Keffi, has made him who he is today because, that was where he started his early education.

According to him, “I am extremely delighted and happy to find my feet here today again after so many years. I am overwhelmed because this college laid the foundation of my life, it made me who I am today including my senior brother”

“Keffi Old Boys Association are putting heads together in order to address the dilapidated infrastructure of the school. He added that the school has produced a lot of prominent and men and women in Nigeria, therefore, the school ought to have developed beyond the level of where it is now in terms of infrastructural facilities.

“I am so concerned and worried about the level of infrastructural decay in this college. I think with the kind of prominent men and women, the facilities should have been better than what it is today. But notwithstanding, we are putting heads together and we want to change this narrative. We want to give back to the society what we have gotten from here. I promise you that next time you will visit here, you will see a total change in this facilities”, he said.

Suleiman, also noted that Government College Keffi was one of the best and outstanding schools in their days. He said, form (5) is equivalent to University Degree of today because they were given the best education then.

“I can tell you that things are no longer the same, form 5 then is equivalent to University Degree of today”, he said.

Suleiman, was nicknamed ‘Town Bouncer’ during his days at the college, said that he inherited the name from his senior brother who was also ahead of him in the college.  “The name ‘Town Bouncer’ was given to me by my school mates. It was my senior brother who was bearing the name and after he left the school, my school mates gave it to me. So, I inherited the name”, he explained.