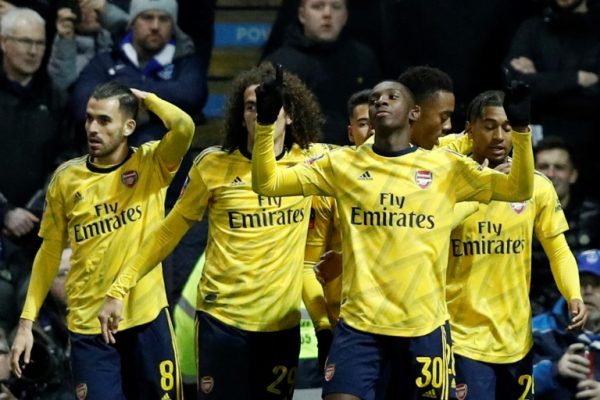 Arsenal coach, Mikel Arteta, opted to gamble on Monday as he made nine changes in the team that lost to Olympiacos, unleashing mostly young Gunners to face Portsmouth.

The gamble paid off as the team bounced back from their Europa League heartache to reach the FA Cup quarter-finals with goals from Sokratis Papastathopoulos and Eddie Nketiah to seal a 2-0 win.

Pierre-Emerick Aubameyang and Mesut Ozil were absent, while Alexandre Lacazette and Nicolas Pepe were on the bench.

Pablo Mari made his debut at centre-back after joining on loan from Flamengo in January and David Luiz, Matteo Guendouzi and Lucas Torreira were among the starters.

Mikel Arteta’s side desperately needed a morale-boosting success after Olympiakos snatched a late winner to knock them out of the Europa League at the Emirates Stadium on Thursday.

Arsenal hadn’t been knocked out of the FA Cup by a team outside the top two divisions since losing to Wrexham in 1992.

Arteta said his players were still feeling “very down” several days after that kick in the teeth, but they survived an early barrage from third-tier Portsmouth to avoid more misery in the FA Cup fifth round.

Sokratis put Arsenal ahead just before half-time and Nketiah bagged the second soon after the interval.

The 37-year-old would love to end his first season in charge with another victory lap around Wembley, especially given their hopes of qualifying for the Champions League are hanging in the balance.

“We’ll keep going because we love this competition. We’re on the right path,” Arteta said.

“It’s a difficult place to come but I have faith in these kids. They always respond and I always knew they would do that.

“They have to learn from the difficult moments and manage them but they have the talent and desire and look how hard they work.”