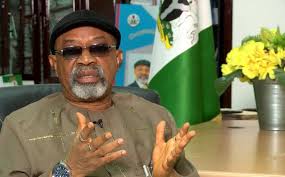 The Federal Government has commenced the review of the National Labour Bills in collaboration with its social partners to ensure best practice in Labour administration and decent work in line with international Labour standard.


According to Ngige, the main focus of the project were in two folds, firstly to fund the review of Nigeria’s extant Labour Laws and secondly to strengthen local capacity to adopt a tripartite approach to the resolution of Labour issues through social dialogue.

The Minister identified the bills to be reviewed as elimination of sexual harassment in the work place, Labour migration, elimination of child Labour, the promotion of gender equality, occupational safety and health.

Other bills expected to be tinkered with by the stakeholders are bills dealing with the restructuring of existing institutions like the Industrial Arbitration Panel, IAP, The National Labour Advisory Council, NLAC, and the office of the Registrar of Trade Union to ensure better and effective performance.

Like all Labour legislation crafted in line with International Labour Standards, it is expected, according to the Minister that at the end of the process, the bills to be developed for enactment will promote right of work, encourage development opportunities for women and men in conditions of freedom, equity, security of human dignity and enhanced social protection for Nigerian workers.

Ngige reiterated the fact that the present administration under the leadership of President Muhammadu Buhari is unequivocally poised to promote healthy working conditions for Nigerian workers in line with International Labour standards.

He maintained that, “This government recognizes that a stable and harmonious industrial relations climate and decent work for all are critical instruments for achieving the Economic Recovery Growth Plan, ERG 2017-2020, the realization of the goals and targets of the 2030 Sustainable Development Goals, SDGs in terms of creating more jobs, improving livelihoods and ensuring sustainable development in Nigeria”.

Speaking at the evnt, Minister of State for Labour and Employment, Festus Keyamo, SAN, noted that the review of the bills and subsequent enactment into law by the National Assembly would bring sanity to the workplace and create conducive industrial relation climate for peaceful co-existence between the employees and the employers of Labour.