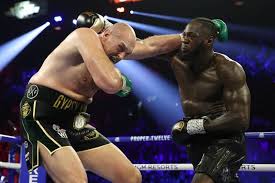 The two first clashed in 2018 and a week ago Fury won the title after seven rounds in the ring.

Wilder had thirty days to call a rematch after that bout and his US promoter Bob Arum says he’s now been formally notified by Wilder’s management that they want the fight go ahead.

Speaking to Ringside Reporter, Arum said the match would take place before this summer’s Olympics.

After his defeat in Las Vegas, Wilder vowed he would “rise like a phoenix from the ashes and regain the title” that he held for five years.