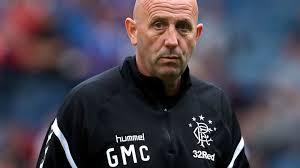 Rangers assistant manager, Gary McAllister is delighted with how Joe Aribo has used his abilities to effectively play at left-back, but insists the midfielder will not be used in defence regularly.

The 23 year old Nigerian slotted in at left-back following an injury to Borna Barisic against Braga at Ibrox last week and then went on to play there at St. Johnstone in the second half.

Aribo was involved in goals on both occasions, scoring a goal apiece, but McAllister has revealed the Nigerian will not be deployed in defence regularly.

”Coming from deep, so to speak, he has shown he is a very capable young man,’ McAllister told Rangers TV.

‘The fact is because he is extremely athletic, he can go box to box. He has not been brought here to be left-back, he is going to be left there higher up the pitch, but it just goes to show that he is a player who has got talent, he is a player in development.

‘And it won’t do him harm, just playing behind the play. He has got a nice big picture of everything in front and he has made some really good decisions playing from there and he has been involved in goals and scored goals.”

Inter could sign Moses for discounted price Inter could land Chelsea loanee Victor Moses for less than the €10 million option included in his loan deal.

The Nigerian joined the Nerazzurri during the January transfer window after his loan at Fenerbahce was cut short, reuniting him with Antonio Conte as the duo worked together at Stamford Bridge.

Included in the six-month loan was an option to make the move permanent for €10m at the end of the season, but Fabrizio Romano of calciomercato.com reports that price could come down in the coming months.

Although Moses has made six appearances for Inter since the move, he has yet to usurp Antonio Candreva as the undisputed started on the right flank.

As a result Chelsea appear willing to lower that fee in order to facilitate a permanent transfer, though a decision won’t be made until the end of April or the beginning of May.