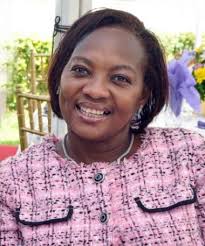 A Street has been named in honour of late Stella Adadevoh in the heart of Abuja, Nigeria’s capital, six years after she died to save the country from the dreaded Ebola epidemic.

Director of Urban Affairs department of the Abuja Metropolitan Management Council, AMMC, Mr. Magaji Galadima, who confirmed this on Tuesday evening, however, said the honor is yet to be officially unveiled.

The official whose office is directly responsible for street and road naming in the federal capital said the trending signpost showing ‘Ameyo Adadevoh way’ preempted plans for an official unveiling ceremony.

The Cable reported few days ago how a twitter user shared the pictures of the signpost to the road, along Ahmadu Bello Way, close to the Nigerian Air Force Conference Centre.

“When we erected that signpost, we covered it hoping to conduct a small ceremony before we can unveil it. We were planning to call her family, health advocates and the press so that it can be seen all over the world,” Mr. Galadima explained.

“But someone just went overnight and removed the cover and preempted our intentions. Before you know, someone snapped and posted it on the social media and it has been trending since last week. People have been calling and asking us to clarify and verify.”

Mrs. Adadevoh was the lead consultant physician and endocrinologist at a private hospital in Lagos when an Ebola patient arrived the country from Liberia in 2014.

The medic and three of her colleagues contracted the dreaded virus while treating the patient, and ensuring he did not leave the hospital.

Their efforts helped stop the virus from spreading in heavily populated Lagos. Unfortunately, they paid with their lives.

“Considering what she has done and the role she played which ultimately led to her death, she needs to be rewarded and naming a street after her is the little we can do at our own end,” the director said.

“All over the world, that is how it is done. Streets are named after people who have done similar things as she did and the FCT administration through the permanent secretary directed my office to find a befitting street to name after late Stella.

“My staff went and scouted for that particular location.”

The over 50 meters’ road shares the same route with the popular ‘Next Cash and Carry’ superstore.

When newsmen visited Tuesday evening, the signpost had been covered once again.

Mr. Galadima said the unveiling ceremony will still hold in a yet to be disclosed date.

“The Jahi district is the newest area in the FCT infrastructure and we have so many streets that are new and we will soon embark on naming them but her case is an exceptional case and long overdue, that is why we chose that particular location as directed by the permanent secretary.

“If you look at what we have done, you will see that ‘Ameyo Adadevoh way’ is very long, more than 50 meters.”

Though not officially unveiled, the gesture of naming a street after the late physician has been lauded by online users.

However, many Nigerians feel she deserves more. Since her death, there has been a protracted demand for late Adadevoh to be conferred with Nigeria’s highest national honors.

Mrs. Adadevoh has received several local and international awards posthumously including the 2018 ECOWAS Prize of Excellence alongside former Secretary-General of the United Nations, Kofi Annan.

However, she is yet to receive any of Nigeria’s national honours, a set of orders and decorations, instituted by the National Honors Act No. 5 of 1964 and conferred upon Nigerians who have rendered service to the benefit of the nation.

“Naming an uncompleted highway in the FCT after late Dr. Ameyo Stella Adadevoh is a positive first step that one can at best describe as a State Honour,” Peter Nkanga, an activist said.

“But this is not a national honour, which undoubtedly Nigerians have and will continue to demand for late Dr. Adadevoh, who knowingly sacrificed her life to save humanity from the spread of the Ebola Virus Disease in 2014.

Nkanga has been in the frontline of the push for late Adadevoh to be conferred with Nigeria’s national honors.